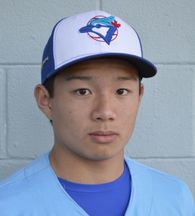 My goal is to further my education and play College Baseball in a Program that has a reputation for both Academic and Athletic Excellence.

I am a Senior from Richmond, BC and I currently play for the North Delta Blue Jays in the 18U British Columbia Premier Baseball League (www.bcpbl.com) which is a “wood bat” league and the highest level of baseball competition in Canada for high school players. The BCPBL has produced many college and professional players.

Some of My Special Qualities

I am a two-sport (baseball and varsity volleyball) student athlete who excels in the classroom and on the field. Each year I set several goals: to maintain my standing on the Academic Honour Roll; to continue to improve and develop my skills, strength, speed and overall knowledge of the sports I play, to be the hardest working player on my teams; and, to have fun playing the games I love. I will graduate in 2017 with two honours diplomas (English and French).

I have had the privilege to represent British Columbia at regional, national and international competitions. I was invited to compete in the 2015 and 2016 Toronto Blue Jays Tournament 12 (T12) National Showcase at the Rogers Centre in Toronto, ON. T12 is a showcase that highlights the best Canadian amateur players with college eligibility. All players are selected by the Blue Jays Baseball Academy, Blue Jays Scouting Department, Baseball Canada, and the Major League Baseball Scouting Department.

I was also a member of Team British Columbia at the 2016 Canada Cup U17 Championship (Silver Medal) and the 2015 Western Canada Summer Games 16U in Wood Buffalo, AB where I started all 7 games, hit .452 with 10 RBIs and 16 Runs Scored leading my team to the Gold Medal.

What My Coaches Say About Me

“Noah has outstanding leadership skills with a high baseball IQ. He is very coachable, willing to learn and improve, and is extremely competitive.”

“Noah is athletic and an advanced receiver and game caller at his age. He has quick feet and release and a strong and accurate throwing arm.”