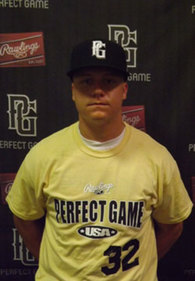 Hi my name is Ben Baggett and my passion is the game of baseball. I am a 5' 11" 190 pound rising Junior (2015) catcher, pitcher, and infielder. I can play anywhere on the field and my versatility is a major asset to my game. I am a gritty and  hard-nosed player and consider myself tougher than anyone I play against. I started for the Varsity team as a freshman and sophomore as a pitcher and infielder. My freshman year I was the number two pitcher and starting infielder and was 2nd team all-region. As a sophomore, I was the ace on the rotation and started in the infield and was a unanimous 1st team all-region selection and was the team's Most Valuable Pitcher. As a sophomore, I hit .410, threw 61.1 innings, and had a 2.74 era.

This fall and coming summer I will play with the Homeplate Chilidogs. As a freshman, I was on the Perfect Game All-Tournament Teams for the 17u WWBA National Championship, 16u WWBA National Championship, and the 16u BCS Finals. I recently attended the Perfect Game National Academic Showcase, where I was named the top 2015 prospect, and had a 1.84 pop time, a catcher velocity of 80 mph, an infield velocity of 85 mph, and was 86 mph on the mound. My fastball was up to 88 this summer. The PG staff reported, " Two-way prospect that impressed behind the plate with his quick actions with a strong accurate arm and a quick transfer and release. Has an aggressive middle of the field approach at the plate and has good bat speed. He pitches from a 3/4 arm slot with a quick arm and is aggressive with his fastball. He has good command of his pitches and mixes them well to keep hitters off balance."

Another big part of my life is academics. I have a 4.5 GPA and scored a 30 on the ACT in the fall of my sophomore year, but I plan to take it again in December. I have participated in different school clubs and organizations as well. In addition to playing baseball, I also play football. I have played for the Varsity teams as a freshman and a sophomore. I started at safety my sophomore year and we made it to the state semi-finals, and my freshman year, we were the state runner-up.

My goal is to play baseball for as long as I can, at the highest level I can, and go as far as it will take me. I will keep working hard and developing until my ultimate goal is reached, which is to play college and professional baseball. I can be an asset to a team due to my commitment, work-ethic, versatility, toughness, and desire to win.