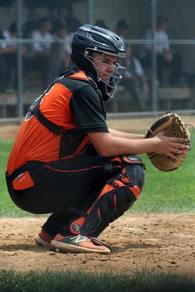 My hunger to succeed would come from my parents. My mother was highly regarded during high school and college. She was strong academically and tops in the area when it came to softball.  She was even selected into the Franklin College Athletic Hall of Fame and was almost chosen for the 1996 USA Olympic softball team. My father was also a high school athlete who never had the chance to play after high school.  He supports me in my endeavors and pushes me to be my best. So from day one, expectations were high for me athletically and academically. I have never been one to be scared of much; however, the one thing I am afraid of is disappointment. I strongly dislike disappointing people, especially my parents. Therefore, I set out to be the best I could in both areas of high school:  academics and athletics. I always told myself that I was not only going to meet everyone's expectations, I was going to surpass them with flying colors and that strong hunger to succeed comes from my parents and from my hard work I have been honored to be named to the 2018 and the 2017 All-State Honorable Mention baseball squad.

My goal setting is not just in athletics. Academically, everyone has goals and I knew I wanted to be valedictorian early on in my elementary years.  However, during first semester of grade four, I received an A- in writing. Receiving that A- made me incredibly upset because I had always told myself I would make straight A's. From that moment on, I made sure my priorities remained steady:  academic first. Maintaining my 4.0 GPA has not been easy considering my schedule is rather full with working on the family sheep farm, being a ten-year 4H member, playing two varsity sports for four years, being class president for four years, and participating in numerous other clubs.  The challenge of being a well-rounded student with the goal of being valedictorian has been a constant challenge. I have to be organized and priority-driven. Sacrifices were made throughout my high school career as I set any free time I had to study. Using determination, I achieved. I am going to graduate at the top of my class with a 4.0 GPA in May.

Another of my proudest moments, occurred during my junior year. I was nominated to apply for the Evansville Courier Press Gold Star Student, which is an honor that only the elite students from the tri-state area receive. Nominated students are competing for either a bronze, silver, or gold honor.  The gold honor is designated for the top ten applicants. I proceeded to gather the letters of recommendation and completed the paperwork. Humbled to even be nominated, I knew it would be an honor to win even a bronze award since I was competing against students from three states.  A few months later, it was announced: I was a Gold Star Student. I was excited, my family was ecstatic, and my school was happy for me. However, I am not just proud for personal reasons. My receiving the Gold Star Student Award allowed me to be a role model for my peers and to demonstrate what my small, relatively unknown community has to offer. I was proud to represent my community and school.  They have played such a large role in my being who I am.