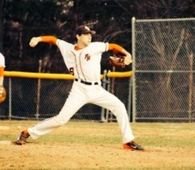 Hello, I wanted to take a moment and tell you a little bit about me as an athlete, student and person.

As you know, I just completed my junior year season at Pascack Hills HS. I am a pitcher and right fielder. On days I do not pitch, I can play either corner infield or corner outfield spot. I can catch if need be as well as I was converted from a catcher to a pitcher at the end of eighth grade. I consider myself a very versatile baseball player and athlete, having moved positions several times to accommodate my team's needs.

I am the only athlete at Pascack Hill HS (in any class) who has earned a varsity letter in football, basketball and baseball.

In football, I played JV as a freshman and was the starting JV quarterback. As a sophomore, I played varsity football, as a quarterback, outside linebacker and longsnapper. I earned a Varsity Letter as a sophomore. This past year as a junior, I had 50 tackles, 3 interceptions and a blocked punt leading to All Big North (league) honors as a Second Team outside linebacker.

In basketball, I earned a varsity letter this past year as a junior, helping contribute to a team that made the County Final 4.

In baseball, I skipped the freshmen team and went straight to JV after the tryout. I was then called up to play varsity for the last 6 games of that season. As a sophomore, I played varsity baseball earning a Varsity Letter. I was one of 3 starting pitchers and played either RF or 3B on my off-pitching days. I was second on the team in innings pitched and strikeouts as a pitcher; and I hit .300 as a position player.  Also, as a sophomore,  I was called upon to pitch the team's state playoff game at which time I pitched 5 innings, 0 walks, 1 hit allowed and zero runs. At the time, I was just 15 years old.

Last summer, for my play at Perfect Game in Emerson Georgia at the National Championship Tournament, I was named to the All Tournament Team by PG.  According to PG, I hit .444 and had a .722 slugging percentage for the tournament. I pitched and played right field.

This past season as a junior, I received All Big North (league) First Team and All Bergen County Honorable Mention honors. I finished 6th in all of North Jersey (public and parochial) in home runs and 7th in North Jersey in RBIs. I hit .430 with a slugging percentage of over .750.

As a pitcher, I had 57 strikeouts in 39 innings; was the winning pitcher in the state quarterfinals (5 innings, 2 H, 6K) and was the starting pitcher for our HS in the eventual state championship game.

As a student, I am in 3 honors classes (English, U.S. History and Chinese) and have approximately a 3.6 GPA. I have been an honor student throughout high school. I was selected into the National Society Of High School Scholars. My school was recently ranked by NJ Monthly Magazine as a Top 10 (No. 7) School in New Jersey for academic standards and rigor. It has been stated in such surveys that a 3.5 GPA at Pascack Hills is a 4.0 at any other school. I take my classwork seriously and will not squander any opportunity given to me by a college or coach. Our family has a long tradition in education and stresses the importance of academic success. My grandfather was a principal, my grandmother was a teacher and my father served two terms on our Borough's Board of Education, including as President.

I can promise my future coach a work ethic, honesty, integrity and achievement on the field and in the classroom.