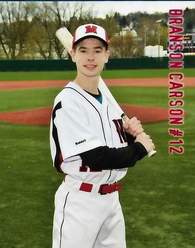 I feel I would be a great addition to your school, and baseball team. I work hard studying, to maintain a 4.0 GPA. I'm hoping to obtain a degree in computers, or to become a chemist as these are areas I feel I will excel. However, I may gain additional interests my next two years at Moniteau High School.  I'm still undecided on my Major, but provided fields that interest me.

Additionally, I work hard training for baseball by working out, playing baseball games, or practicing skills daily. I started baseball just prior to my 11th birthday. My parents were both athletic, but couldn't get me to touch a sport until I approached them about baseball in 5th grade. My dad tried out for the Colorado Rockies at age 16. Additionally, he hit 92 MPH his Senior year of high school. I also inherited my dad's speed with him running the mile in 4:12, and previously holding the cross country record. He trained me my first year starting out as a catcher, and pitcher in Majors. My second season I hit 7 home runs, and my third I hit 14 home runs, and was pitching close to 70 MPH, just turning age 13.  I really enjoyed catching, which I did for 4 seasons until completely transitioning into a pitcher, and fielder.  I've also played infield, and outfield.

My rec Majors team won the championship working together. Some kids on my rec team played for Beaver Valley Baseball (BV), and a parent told my dad I should try out. I was given a tryout with Brian Smith, and was offered a position for his BV 13U Black team. I never had professional lessons at this point, so I wasn't ready to play on a red team yet. My mom ended up getting me pitching lessons with Nate Nery, my BV Coach, a former Minor League pitcher, then I ended up a main pitcher for my team, pitching a no hitter during one of our games.  We won many tournaments. My mom owns an alcohol company that she had to  put a lot of money into, currently about to go national. I was invited back to BV, but my mom had to save money at the time, and I wanted to learn from former Yankees pitcher Matt DeSalvo, so I transferred to a newer, less expensive team New Castle Storm 14U. I helped them win their first tournament with 15 strikeouts in the final game.  Also, I had a game with New Castle where we only had 8 players, we even had to take an out for the missing player. We played a very large team with our first pitcher getting in trouble being down 13-4 the first inning. They called me into pitch, and we ended up winning 14-13. That team's coach said I impressed him so much winning with 8 players, when we were down so far, that he invited me to play on his World Series 14U team. Additionally, Matt DeSalvo invited me to play on his 18U World Series Team. When we received both invitations we were in another state visiting my very sick grandmother in a nursing home so I wasn't able to participate, but was honored being invited to both. I also was scouted and asked to play 18U  at age 14; however, I didn't want to leave my team because they needed me. New Castle Storm broke apart from coaches changing teams, and I decided to try play 18U team Knightline in 2020. I also started pitching for Varsity at age 14 for Moniteau High School, being one of the youngest in my 9th grade class. I struck out many batters making newspaper sports headlines.  I also did my first PBR showcase 2/20 being shared by PBR batting on their social media pages, and ran a 7:03 sixty. I qualified there for the PA State Games, getting shared pitching on their social media pages during the games. PBR scouts mentioned my wippy sidearm. I've been told that I have a deceptive pitching style, my natural form I used dating back to when I pitched in Majors. I pitched well at the PA State Games June 2020 with many batters not being able to handle my low 3/4 delivery. I also have learned many different pitches, having over 2,000 RPM on some of my pitches.  On August 10th, 2020 I hit 85 mph at baseball tryouts. I've been taught a change up, slider, and curve ball. Opposing teams have said they cannot see my sinking fastball, and the paper said I throw a slurve. PBR scouts said I have biter action.  Also, I went in when one of our 18 year old pitchers got hurt against the 1st place team at Bob Cene Park, my 1st official 18U game, striking out 6, with no earned runs. I learned the next day that there were many D1 commits, a kid being drafted to MLB, and top prospects on that team when I turned 16 one month prior.   I will work hard if you consider me for your team, and appreciate any opportunity that comes my way. I also plan to keep working hard in school to obtain my degree.