College Coach? Click here to view all of Will's information. 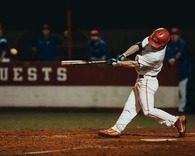 I've been told by many people that I play baseball like it's meant to be played. Here's a couple of quotes that have been written about me in the last year:

From a recruiting coordinator's email after he watched me play: "..I was extremely impressed with how you play the game.  I am a sucker for guys who play the game hard, and it makes it even better when their skill sets match their intensity on the field.  I didn’t see many guys flying around the field the way you did, and your actions at SS would lead me to believe you are a guy who could stick there at the next level, which is not something I could say for every high school guy I see play that position."

From Diamond Prospects on 2/16/19: Baumhofer has caught the eye for several seasons now and the tough-nosed MIF did the same again today. A LHH, he showed some bat speed when turning on some balls to rightfield, while slashing an outer third pitch to left. Is a competitive at bat, any pitcher will tell you how pesky those types of hitters can be. Offensively, he knows what he is, which is a complement. He is showing more confidence in the glove and improved arm strength. There will be a college coach that will be attracted to him soon and look like a genius with this kid that plays winning baseball.

4/10/19: Have watched Baumhofer several times the past few years and he, once again, checked boxes in my eyes tonight. He squared the ball
up in all four AB’s and has toned his game down a bit but still plays fast. At times in the past, he has been known to be “reckless” on the diamond. Not the case now, as he continues to wreak havoc on the field but in ideal situations. Also showed improved arm strength from the shortstop position but still believe he slides over to second at the next level. Exciting times coming for this junior.

From Diamond Prospects: "High tempo and a go-getter, Baumhofer looks and plays like a baseball rat. Short and compact swing from the left side and strings together quality AB’s. What also stood out was his baseball IQ and base running skills...Baumhofer will get knocked on due to his size...but don’t let the size fool you. Solid showing today. Keep being that grinder."

On the field, I work hard during the season and even harder in the off-season. I have the qualities you cannot teach.

I will continue to work to improve on and off the field. I'll give you 100% no matter where you put me.