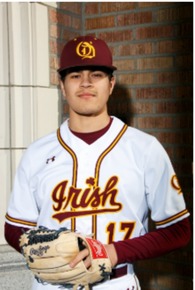 My name is Anthony Adams and I am currently a 16 year old Senior at O'Dea Catholic High School in Seattle, Washington.

My Father Harold Adams Sr. played at Gonzaga University and minor league baseball in the Northwest. He was drafted by Philadelphia in 1974 and was inducted to the Tacoma Baseball Hall of Fame.

PBR Wahington- 5-foot-10, 185 pounds. Proportionally build with a strong, durable frame. Adams got the start for O’Dea and was highly efficient across his 4+ innings of work. Punched out 5 and only allowed 1 free pass. Pounded the zone early and often with his FB at 77-80 and mixed in a heavy dose of tight sliders at 70-72. Shows the ability to maintain velocity and stuff while working out of the stretch. Simple, clean mechanics with consistent direction towards his target. High ¾ arm slot with loose, clean arm action. Quality hand speed out front at release. Lands soft and keeps eyes on target thru his finish. Throws with intent but avoids over-throwing or tensing up early in his delivery. Highly competitive demeanor when on the bump. Stays even keel but shows some fire/emotion when getting out of big jams. Understands how to pitch and should continue to develop as he adds strength to his frame. - Dan Jurik-Prep Baseball Report March 14, 2019

PBR Washington-‘20 RHP Anthony Adams came on in relief and continued to show advanced feel for his breaking ball. On our previous look, Adams went right at hitters with his tight slider at 70-72 and Thursday was more of the same. FB ranged between 77-79 while his breaking ball was in the 68-72 range. - Dan Jurik- Prep Baseball Report May 3, 2019