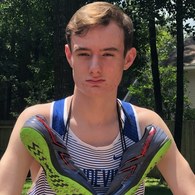 Gaming has been part of my life since I was 5. It all started with a Wii I got in 2008, playing games like Mario Kart and Smash Bros. I didn’t get into shooter games until I played Call of Duty: Black Ops 2. After playing Call of Duty and Halo for a few years, I was introduced to Overwatch by friends. I started playing Overwatch in December of 2016 on my XBox One. I was a hard struck Silver until I started playing on a laptop. At the start of my PC days, I was and still am a main tank player who specializes in Reinhardt and Winston, then later Sigma. I can also play Wrecking Ball and Orisa.  My 1st competitive season was Season 11 where I placed gold, then dropped to bronze. Most people would give up and leave, but I knew I was better and decided to upgrade to a budget gaming laptop (Acer Nitro 5 to be exact). With my new laptop and specialized mouse in hand, I easily climb into silver and into mid gold in Seasons 13 and 14. I kept raising my goals, 1st I hit platinum, then diamond. In Season 15, I hit low platinum where I stagnated for Seasons 16 through 18.  In Season 19, I was on top of the world; I climbed from low platinum into diamond. I hit my peak on tank in season 21 with an SR of 3247. In season 22 I decided to buy a smurf account to improve my tank play, but found something greater: my potential on support heroes like Lucio and Brigitte. I finished my placements at 3100 and climbed into low masters with my peak at 3576. My Baptiste and Mercy have greatly improved and I have added Zenyatta into my hero pool.  I want to be the next Grant “moth” Espe and Yang “tobi” Jinmo.  I will always come back stronger.

I am also a tank player on my main account JoltsNBolts #1931. I am 3501 playing Reinhardt, Winston, Orisa, Wrecking Ball, and Sigma.

I was a support player for Esports Tower Team Gold, I was a main tank for MI6 in League Zero.

I am also on my high school’s varsity Cross Country, Indoor/Outdoor Track and JROTC Physical Training team and am currently the Scouting Captain on our FIRST Robotics Team.  So, you can see I am used to working hard and going the distance.