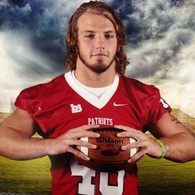 I just recd my 2nd offer. From USF Bulls! My team us currently 5-0I was picked to be a defensive captain. I was picked preseason All State!

we just updated my highlights on hudl for my first 3 games this year.

I am ranked as the number 37 overall recruit in Alabama

I was just named MVP linebacker at the VTO Alabama Rivals showcase. Best of the best! I'm very proud.

There are several articles on 24/7sports and rivals recruiting pages..

Including an article about a rivals Underarmour camp at Hoover where I competed with Shon Dion Hamilton, Tre Williams, Petera Wilson, I was told by analyst that I was just as physical big and fast as any of them. Rivals is ranking me with 3 stars

I had a great Junior Season! I had over 100 tackles with 16 sacks from my new SAM linebacker position. I helped my team to win the region championship for the forth year in a row. I was named 1st team All Region and voted on the Huntsvile Times AL.COM elite team.   I was invited by Alabama and several other major programs to come to several games this year...I was very excited for the opportunity to meet thier coaches including coach Saban.,and get started in the recruiting process.

I am 6'2", 225lbs. My Freshman and Sophomore year I started bothways on varsity as an Offensive Tackle/Defensive End.My team finished second place in the state and I earned First Team All Region as a sophomore and as a Junior. An honor to me because it is voted on by my competitors coaches.. I am willing to work hard at all times and I compete on the field and in the classroom as well. I want to continue developing into the best football player and the best person that I can be in the eyes of God, my family, coaches and peers.

I have attended several combines and camps as a  linebacker  ( Rivals.com, NUC Elite 100,  recruit one day camps etc) where I received MVP linebacker awards and

See my "latest news" section on my rivals.com profile page

My dream and goal is to play football at a Division I school where I can get an education to help my life be more successful in the future.II would love to be an Academic All American and continue to develop as a player and leader maybe even play Pro Football one day.