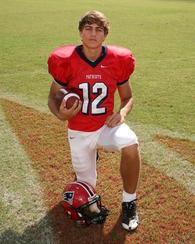 Hello, my name is Nick McLaughlin.  I am entering my senior year at Pike Liberal Arts School in Troy, Alabama.  I will be eligible to graduate in December of my senior year.  It has been a goal of mine since the seventh grade to play college football.  While school is in session I get up at 5:00 every morning and go to the weight room and then on to school where I have maintained a 4.0 grade point average on the Advanced Diploma Track.  I have also taken college classes (Dual Enrollment ).  I am also involved in various school activities that are not related to sports; such as, Senior Beta, National Honor Society, Government Club, Patriot Club, Spanish Club, and Fellowship of Christian Athletes.    I am 6’ 1” and weight 210 pounds.  I play on both sides of the ball as a linebacker and running back at Pike.  I run the 40 yd dash in 4.6, the shuttle in 4.16, my vertical is 33’5”, my broad jump was 9’4” and I repped out 185 pounds 19 times at the Under Armour combine.  My max on the bench press is 305 and I squat 420.  I have started on my varsity football team since the ninth grade where my ninth and tenth grade years I was a member of the State Championship Team.  I have led the team in tackles and rushing yards the last two seasons.  My list of accomplishments includes not only football but also baseball and basketball as well.  I have played baseball since I was four years old and have been offered college scholarships in baseball, but my heart is in football.  Various accomplishments include:  Football—1st Team All State, All State Honorable Mention, Most Valuable Player (Sophomore and Junior), Player of the Week, Super 12 Honorable Mention, All County Team; Army Iron Man Award, National Underclassmen Combine MVP LInebacker and Top 100 regional prospect; Baseball—State Tournament All Tournament Team (Sophomore and Junior), Super 12 Selection; Best in USSSA Honoree, Under Armour All American Team Honoree, AISA All-Sate, and 2011 AISA State Hitter of the Year; and Basketball—member of junior varsity state championship team, most valuable player of state tournament, varsity state tournament All Tournament Team.

I believe that I have a lot to offer a college football team.  My hard work and dedication speak for itself.  As stated earlier I rise at 5:00 in the morning to lift weights, I have been the most valuable player of five different ball teams, and I never take no for an answer.  I am very self-motivated and very coachable and will do whatever I can and whatever it takes for my team to be successful.  My teammates view me as a very positive person as well as dedicated.  This has allowed me to be a successful leader of my athletic teams.  My first choice to attend college would be to attend college in the southeastern portion of the United States.  I would go almost anywhere to play football but if I had a choice I would stay in the southeast so my family could come and support me.  My family has gone above and beyond to make sure that I was successful in anything that I have ventured to do.  With that said, I would like for them to be able to share my continued success with me.

If I had my choice I would love to play Division I football.  There has to be nothing like playing in front of tens of thousands of screaming people.  However, I am open to any school that is serious about me being a part of their team.  As of right now I am leaning toward a major in architecture.  My athletic goals are to continue to play the game I love and that is football.  I have been fortunate to be successful in two sports, but football is my heart’s desire.  I feel that if I enter college in January that I have a very good chance of starting somewhere on the field as a freshman.  However, if the coaches think I need a red shirt year that is fine with me and I will work that much harder for a starting position the next year.  My goal is to make a positive impact on whatever football team that I am allowed to continue to play with and make the team a successful team.

Nickolas has not yet added athletic information.