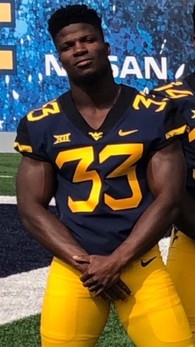 *  I am currently an academic senior and football red-shirt junior at West Virginia University.  Looking to be a Grad Transfer in May with 2 years of  immediate eligibility.   I have been in the WVU  Mountaineer football program since my second semester of my freshman year.  My experience is Running back, slot receiver and special teams.  I am looking to obtain a Masters Degree where I can make an immediate contribution to the football team.  I will use my 4 years of highest level Division 1 college football experience to provide leadership on the field and off the field.

*  Starting Varsity Running Back this season at my Quad A High School in the toughest conference in the state - 2014.  Quad A is largest classification there is in Pennsylvania