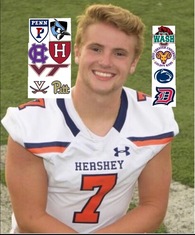 My name is Anthony Zimmerman, Class of 2020 at Hershey High School. I’m 6’0” and 205lbs., the past season as a junior, I started Varsity at ILB in the 4-4 defense. On the first defensive series of our third game, I sustained a displaced fracture in my thumb. Being the defensive captain, I didn’t want to let my team down so I played the whole game in excruciating pain. Surgery was scheduled for Wednesday, seven screws were inserted, and I was fitted with a brace. After missing two games, I played the last five games with seven screws, a brace, and my hand wrapped like a club. I still managed to lead my team in tackles for the second year in a row, and I had higher per game stats from the previous year.

During my 8 years of football experience, I have become a very versatile player by playing a number of positions as needed to better the team. In the off-seasons, I honed my athletic abilities in numerous sports, including baseball, basketball, soccer, wrestling, lacrosse, volleyball, TaeKwon-Do, and track and field. In 2015, my 4x100 Hershey Blaze Track Team qualified and traveled to Jacksonville, FL, to compete in the USATF National Junior Olympics.

I believe what makes me different than other recruits is my positive leadership and my disciplined training and practice regiment. As a leader, I respond with encouragement by demonstrating courage, pride, and an unyielding desire to win. I attribute my discipline to train hard and my perseverance to improve myself on and off the field to the 4 years of TaeKwon-Do, at the end of which I achieved my 1st Degree Black Belt. The five tenants of TaeKwon-Do — courtesy, integrity, perseverance, self- control, and indomitable spirit — became a part of my life on and off the football field. These tenants helped shape my character. My coaches and teachers consider me to be a positive influence, on the field and in classroom, because I lead by example through my work ethic and my determination to never give up. I demonstrate respect for my teachers, teammates, coaches, referees and opponents. I play hard between the whistles, but always with the utmost sportsmanship. I do not seek accolades or trophies because I believe recognition of achievement comes from within.

Another differentiation from other recruits might be my Academic Achievements. Academically, I was inducted into the National Honor Society, and I thrive on maintaining distinguished honors each marking period and participating in multiple clubs and service projects. Currently my GPA is 3.9, and I took three honors classes and advanced Spanish as a Sophomore, and I’m taking three AP Classes, one honors class, and advanced Spanish this year, as a Junior.

Even though I have played many sports, Football is the one sport I think about and train for all year long. My ultimate goal is to obtain an excellent education while playing competitive college football. My preferred Majors are Economics and/or Finance.

Thank you for your time and your consideration!