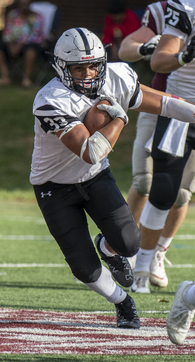 My varsity football career began in 2017, when I was a freshman. At the start of the 2017 season, I hoped to work hard, contribute to the team, and earn a spot in the varsity line-up. After preseason I was second on the depth chart for the varsity team. In the first game of the season, our starting RB went down with a knee injury. My coach put me in. I played the remainder of that game and started the remaining eight games. Our team went undefeated (9-0) on the year. Though I was a freshman and this was my first year of varsity football, it was a very successful year individually and for my team. I carried the ball 179 times for 1153 yards, averaging over 6 yards a carry and scoring 9 touchdowns. The previous single-season rushing record at my school was 1053 yards in 7 games (held by Curtis Enis, who played for Penn State and the Chicago Bears). At the end of the season, I was named co-offensive player of the year.

In my sophomore season, in 2018, I worked hard to keep my starting job as the running back. After training hard and lifting over the summer, I put on about fifteen pounds and improved my strength, balance, technique, and footwork. I started all 8 games of the season, and finished with over 100 yards per game. Our team had a record of 5-3. Although there were some disappointing losses, this season was still a successful one for my team, and individually. I was named offensive player of the year for the second consecutive year.

Though it is my dream to play college football, I want to play at a school that is a good fit for me academically. I am an Andrew Wilson Scholar at Kiski, which means that I competed successfully for a four-year merit scholarship that covers tuition, room and board at my school. My GPA is consistently in the mid 90s, and I plan to keep taking the most challenging classes I can. In the fall, I took the PSAT as a tenth-grader. My score was 1260 (out of 1520), 640 verbal and 620 math. This score put me in the 96th percentile nationwide.

I hope one day to become a successful entrepreneur. In college, I am hoping to major in English or maybe psychology or sociology while gaining exposure to fields related to business and entrepreneurship. Ideally, my school would combine high-level academics with strong professional training and a solid alumni network. I am also open to serving in the US military and attending a service academy. I would prefer to stay in the northeast and am hoping to use football to help me gain admission to a selective college or university that matches my goals and interests.