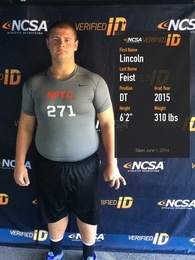 My name is Lincoln Feist.  I am a Senior at Saint Thomas More High School in Rapid City, South Dakota.  I play and compete in four varsity sports: football, basketball, baseball, and track.  I have loved competing ever since I can remember.

In football, I was named All-State first team for offensive line.  I was also named all-conference for the Black Hills.  I have started every high school game since my 8th grade year and play both offensive and defensive line.  As a freshman and sophomore, I earned “All Conference Honorable Mention.”

Our STM varsity baseball team won the State Championship in 2013 and 2014.  In the 2013 Championship game, I pitched a complete game, throwing 105 pitches in a 4 to 1 victory.   I was the 2014 starting pitcher for the Championship game giving up no hits in three innings of pitching.   I’ve started on our STM varsity baseball team since the 8th grade, pitching and playing first base during the four seasons.   I was an “Honorable Mention All Region” as an eighth grader and as a freshmen I was “First Team All Region” as a pitcher. My sophomore year I was named 1st team All-State as a left handed pitcher and this past year I was named 2nd team All-State as a 1st basemen.   Another highlight is that I pitched a complete game victory as a 13-year-old in a varsity American Legion game in Dickinson, ND, in 2010.

Our high school basketball team finished the 2013-14 season with a 4th place finish in the State Tournament.  Our program has won four state championships in the last ten years. The program is disciplined, and I enjoy being a part of a program with high expectations each year and playing a role on our varsity team.

In track and field, I throw the shot put when I can work around baseball.  This spring, I was the defending Black Hills Conference Shot Put Champion and qualified and participated in the SD State Track Meet where I placed 5th.  I am going to a personal trainer four times a week where I focus on complex and explosive lifts in addition to plyometrics.

Academically, I earned a 4.0 throughout STM Middle School, and my STM High School GPA is 3.89 through my junior year. My class load included advanced math classes, English, AP US History, Chemistry and Religion and Spanish III.   I was inducted into National Honor Society in the Spring of 2013 as a sophomore and have been on the honor roll each semester in high school.  I am also active in Fellowship of Christian Athletes (FCA) and Packing Hope, an annual service project at our school.  I'm also a leader for TLC (Teen Life Choices), which mentors to younger grades about making good life choices.  This past Spring I was honored to be selected to serve on a 10 day mission trip to Jamaica where we worked with displaced and handicapped children.   I'm also a coach of the Flame, a Special Olympic coed basketball team for those over 16.  When I am not playing sports or studying, I like to hang out with my friends, play board games, chess, roller-blade, ping pong, and cards. I have an older sister (Lauran) who will be a Junior at the University of Notre Dame, a younger sister (Madison) who is a sophomore at STM this fall, and twin brothers (Benjamin and Wilson) who are eleven and going into the 6th grade at STM Middle School.