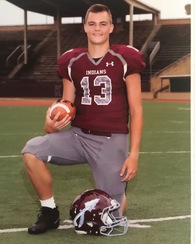 I am currently a Junior at Dobyns Bennett High School  in Kingsport, Tn.  I am a dedicated athlete with a goal of playing quarterback at the collegiate level.  I currently carry a 3.9 GPA, and strive to balance athletics and academics.

I have played the quarterback position for several  years, and have worked constantly to improve my skills, and learn more about the position.  I began attending camps three years ago, and have competed well against my peers nationally.  I was named MVP at the Complete QB camp in Lexington, Ky in 2012.  I also have attended several National Football Academy camps, and have been selected as an outstanding QB and given an invitation to "The Duel" national quarterback competition three straight years, placing 7th in the nation all three years, 2012, 2013, and 2014.   In 2014, I attended the SVS Quarterback Camp in Lancaster, Pa, where I was the only 8th grader  from my camp to receive an invitation to the East Coast Elite Quarterback Showcase.  In July, 2014 , I was named one of the top three QBs in the 2019 class at the East Coast Elite Showcase, at Spooky Nook Sports Complex under Coach Jim Cantafio.   In the Fall of 2014, I competed as a  QB for Team Tennessee competing for the FBU National Championship.  In January, 2015, I was selected as the starting quarterback for Team Red in the First Annual DMAXX All-American Game in Myrtle Beach, South Carolina. Most recently, I was named to the Youth 1 Sports Freshman 450 Watchlist, a list of the top 9th grade prospects in the nation.

I have a strong work ethic, and a deep desire to become a top QB at the next level.  I have been blessed with physical gifts, and am currently  6'4", 199 lbs .  My football IQ is extremely high, and I believe I can be the player that will help your program.  My family support is outstanding, and my character excellent.  Feel free to contact me with information about your program and camps.  For information on my athletic ability and potential, contact Coach Graham Clark at Dobyns Bennett High School, Kingsport, TN.