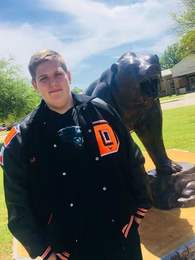 My Name is Whitt Sparks.  I am 16years old and I'm in the 11th grade at DeKalb High School.  I love the game of football.  I love to study the history of the sport by reading and studying the great teams so I can understand better the game of football.  I also read about and study current teams and programs on the internet, tv, and in magazines.  I'm a sports feature writer for my local town's paper(Bowie County Citizens Tribune).  I've been writing for the paper since the fall of 2015 and I love it.

I have played football for 9 years.  4 of those years were in little league(peewee) football.  I received the top lineman award for my team every year I played.  I was all conference 3 out of 4 years, and was given the outstanding lineman for the league in my final year(2014).  In 2015  was my first year playing "school ball".  I was the starting strong side tackle where my coach had enough confidence in my ability to run the ball to my side of the line over 80% of the time.  My size along with my desire to win and improving skills has given me opportunities to excel at Football.  In 2017, my freshman season, I was called up to the varsity squad the last three games of the season, where I started the last two games.  I train 6 days a week doing cross training, mobility, agility, and strengthening workouts.  These workouts have paid off as I have seen improvement in all these areas, especially in strength where I have made significant gains through 2019.

In addition to my athletic achievements, I am also serious in the classroom.  I have a 4.0 grade point average(I have never had anything less than an A in any class I've ever taken).  The skills I have used and work ethic I use on the field is also the same in the classroom.  I want to be the best that I can be no matter where I am.

I love sports and want to be a part of it in some form or another in my professional life.  I believe that as I grow and mature physically and mentally that I will have the tools to be a college football athlete.  From there, I believe that I will want to continue to be a part of sports after my playing days are done, in either coaching, managing, sports business, or sports law.

While I have several schools that I cheer for, I want to be a part of a school that is the best fit for me.  Where I can contribute the most to the team's success and that will help me reach my goals on and off the field.

Whitt has not yet added athletic information.

Yes. I'm taking dual credit classes in STEM. I should have close to an associates degree by the time I graduate high school.