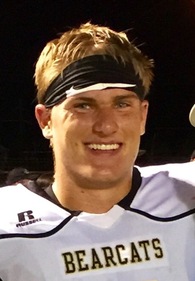 I’ve been told I cut my teeth watching football games on my dad’s lap and learned to throw and catch a Nerf football before I could walk. However, I did not start playing organized football until I was in the 7th grade.

After I lost my dad to an auto accident at age seven, my mom made sure I was able to play basketball and baseball through the YMCA as well as join the local Boy Scouts program. When I was nine, my mom developed breast cancer but she still made sure I was able to get to practices, games, and meetings in order to learn the value of being part of a team and community. My mom is a cancer survivor and taught me how to press on regardless of life’s circumstances. In the 7th grade most of my friends joined the football team and I am grateful I was able to join them. Through football, basketball, and baseball I learned the value of being physically and mentally aggressive on the field and court but also the importance of leaving the aggression there. I’ve been referred to as the “Gentle Giant” and “The Beast”.

Entering high school, I chose to concentrate on football, basketball, academics, and scouting. During my time on varsity football I have played a wide variety of positions such as: Left Tackle, Defensive Line, Middle Linebacker, Tight End/Full Back, and Long Snap. I was awarded All District Football for two years, Red River All Star 22 Football, Honorable Mention All-State Football, All Region Football, and All Academic Football. My basketball awards include: All District Basketball, District Offensive MVP Basketball, and All Academic Basketball.

On the academic side of things I have a 3.9 GPA and scored a 28 on the ACT. My goal is to raise my ACT score to a 30. I have received awards such as: Who's Who in Geography, Who's Who in Biology, Who's Who in Chemistry, and the Times Record News Star Student. I am the Vice President of our National Honor Society,  and also participate in PAL's. Having a younger sister has helped me develop my mentoring skills to include the value of patience. I am currently ranked as second in my class and it is my goal to graduate as the Salutatorian.

When I am not studying or practicing, my time is spent volunteering, and working on my uncle’s ranch in return for a hunting license. I have completed my hunter safety course and over 200 hours of volunteer work coaching at football camps, basketball camps, and helping with various scouting events. I have recently received my ranking as an Eagle Scout and also help my step-dad with his lumber business.

My goal is to earn my way through college on an athletic and academic scholarship but at the moment I am undecided on what areas of study I’d like to focus on. My focus right now is on football! I look forward to being a part of a college program that will utilize my size, my versatility, and help me develop and refine my skills to best meet the needs of the team.