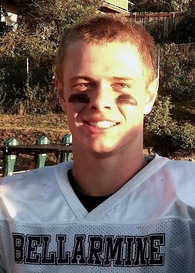 Versatile, coachable and smart student/athlete that plays wide receiver, safety and outside linebacker at Bellarmine Prep High School in Tacoma, Washington. Calvin had another great year in 2011 finishing the season with 131 Tackles, 3 Sacks and also added 43 Catches for 704 Yards and 6 TD's, second only by 1 catch to Michael Rector (Stanford bound). He was selected to the 1st Team All-Narrows League 4A as a unanimous selection at Defensive Back 3 years running and voted by his coaches and teammates as the Defensive MVP (Mr. Defense). As a Sophomore, Calvin finished first on the team in total tackles with 121 (86 solos, 35 assists). At 6'2" 210, Calvin is a very athletic talent that can flat out run and has a real nose for finding the football. On defense, Calvin has great football instincts and creates a lot of havoc for opposing offenses. Calvin is also outstanding at track where he continues to showcase his sprinting abilities and exceptional speed. Calvin is a leader on and off the field who excels academically carrying a 3.93 / GPA (non weighted with Honors and AP classes).  Transcript available upon request.