College Coach? Click here to view all of Eric's information. 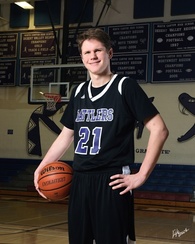 Basketball has been a game changer for me.  Growing up, I was always the biggest kid, but I was also one of the heaviest and slowest.  Even though I have always been big, I have been behind most boys my age in physical development—not as fast, not as quick, could not jump as high.  My mother started me playing basketball in the Phoenix city rec league when I was 5 years old.  For years, I was the last or one of the last players down the court.  The same thing happened when I started to play club ball in second grade.

When I was 13, my parents told me that I own basketball, that they could not make me play or play for me.  I had to decide to play and commit myself to getting better or quit.  I decided to play and have been committed to the game ever since.  I have transformed my body the past 3 years from a chubby, 6’1” and 205 pounds to a now lean and strong 6’6” and 205 pounds.  Now, the only players that may beat me down the court are point guards.

Like most kids, my parents have been a big inspiration in my life.  But for basketball, it has been my coaches.  My club coaches with AimHigh Elite Athletes in Phoenix, Reggie Fox and Terrell Washington, and my high school coach, Michael O'Guinn, have been great teachers and motivators for me.  They have shown me how to make the most of my abilities and have inspired me to want to play and get better.  The two biggest motivators in life are inspiration and desperation. I have been inspired by the people who have helped me get this far to become a student of the game.  I know that I have a long way to go, but plan to get there.

This is what I would bring to your program.  My strengths are defense (particularly in the paint), rebounding, setting screens and picks, passing, finishing in the paint, hitting mid-range jumpers, and doing whatever else is needed to win a game.  I am developing a three-point shot from the baseline and wing.  I am tough and physical and have a good basketball IQ.  On offense, my coaches can count on me to run plays because I know plays all serve a purpose whether it is to get someone open or to just make the defense move until they make a mistake. Street ball is not winning basketball.  Because of how I’ve been trained and because I am smart, I can read the game like how great professional point guards read the game. I understand why a player does what he does and can recognize patterns and habits. Often, I can see the entire other team’s tendencies just from watching 4-5 possessions.

Everything I have learned from basketball—discipline, commitment, focus—I also apply to the rest of my life.  I consider myself to be a good student, and I want to also succeed academically in college and in life after college.  I am taking Honors, Advanced Placement, and International Baccalaureate courses in high school to best prepare myself for the rigors of college.  I plan to graduate from North Canyon with an IB diploma.  Right now, my academic interests mostly lie in the liberal arts, in particular, history, languages, government, and economics.  I plan on eventually attending graduate school.