College Coach? Click here to view all of Jordan's information. 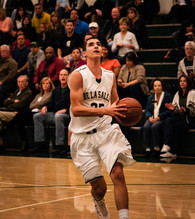 Talk about it in the norcalpreps Message Boards

Ratinho has been having a solid summer for his Greenline club

For most high school programs, a 21 win season would normally be considered a success. But for the De La Salle Spartans last season, their first round postseason exit was below the 25 plus win season streak of eight years that started in 2005.

In the upcoming season, expect the Spartans to have a revival in their number of wins as 2016 prospect Jordan Ratinho leads the way. The 6-foot-5 guard averaged 9.2 points, 3.4 rebounds, and 3.7 assists last season and has been having a solid summer for his Greenline club that is also the De La Salle summer team.

Spartan Coach Frank Alloco is excited about his upcoming three year varsity player and says, "Jordan is a "team first" guy who is one of the hardest working players I have ever coached. He is a coach's dream: a player who listens, works hard, and accepts coaching and challenges! Jordan is an outstanding shooter, hit 9 threes in a summer league tournament this year! He is a committed player who has advanced his game each year. An outstanding shooter, Jordan has now developed a 'slashing' game with great skills to get to the rim."

As the summer winds down, Ratinho hopes to get more college interest as Eastern Washington, Pacific, Portland, Saint Mary's, Santa Clara, and UC Santa Barbara have already been inquiring. He is open to his recruiting process and has not narrowed down his criteria yet. Ratinho has a 3.8 GPA and is undecided about his major but wants to play in a program that needs a shooter/slasher with good ball handling skills and court vision.

Alloco has this take on the college potential, "Jordan is the 'silent assassin,' a player who quietly tears you up with his prolific scoring ability and unselfish play. A total team player who can score from the outside, get to the rim or post up. He is a fine ball handler who I truly believe could play point guard at the next level."

Playing at a high profile high school such as De La Salle can cause many prospects to be hidden from the limelight. Ratinho describes himself as being team oriented and almost workmanlike who just tries to do his job for the team's sake.

Alloco confirms this about Ratinho's demeanor, "Jordan has been described as "one of the most humble 'stars' you will ever meet. He does not like attention and lives by the adage 'quietness and confidence shall be my strength.' A committed student-athlete, who achieves at a superior level in the classroom. One of the most loyal people I have ever known. A committed player only interested in the success of his team! He always puts the needs of the team before any personal interests."

When asked what have been some setbacks in his life that he had to overcome, he lists two from the past few months and how he puts them in perspective. Ratinho says, "Losing in the Norcal Playoffs last year, and being determined to not let it happen again. Losing my grandfather this past month, and that life is too short. That you need to play hard every day and every game."

Coach Alloco echoes these sentiments, "I have coached many players who have gone on to the Division I level and Jordan definitely has the ability to succeed at that level. As he continues to work on his game, gain some strength and maturity, I believe the sky is the limit for him. Very comparable to Elliott Pitts, who plays at Arizona. With his coachability, desire to get better, and fantastic work ethic, I believe Jordan is a can't miss prospect!"

Alloco continues, "I have been impressed with Jordan since his freshman season. His ability to step into the bright lights, playing at a national level as a freshman is certainly an amazing feat. He is a committed student-athlete who truly excels at everything he does." Watch for Ratinho to lead the revival for the Spartans this upcoming season in Concord, Calif.