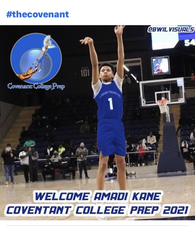 First off I am thankful for this process of physical, mental, and spiritual development which is still allowing to live and learn to become a better version of myself. I understand that with time things can get better or get worse which makes your future a pivotal point that can make or break the rest of your life. With that being said, I’ve always asked myself, “ Where do I want to be in a year?” I’ve always been able to answer that question off of instinct because I know what I want to do. After I graduate high school (which I have),I will prepare my body and mind for playing basketball at the next level by working out  consistently, network with experienced college athletes and coaches ,work on my game , ball handling, conditioning, body weight workouts, hydration, watching film, and even recovery days all on my own. I will do a post grad year at Covenant Prep School. I will attract the eyes of college coaches during my prep school basketball season and based on what each school is offering academically and athletically for my path is where I’ll decide to obtain my bachelor’s and potentially by master’s in literature from.

When I was younger, I could never grasp the concept of what I wanted to do. I knew what I was into but I never knew what it would lead to or how it would change me. Now, that vision becomes more clear as I approach adulthood. In 5 years, I could be the result of either two of my paths, which is getting my master’s degree in literature as well as a minor’s in communications to write poetry and books for kids or adults, or continue playing basketball overseas to open opportunities to new experiences, connections, and understandings about the rest of the world ( when this pandemic hopefully settles). I will still be writing as I travel the world as an international basketball player because writing is my therapy, saving grace, and expression away from home, family or friends. However, by achieving my master’s, my priorities for my literature aspirations will be shifted in comparison.

I’ve been playing the game of basketball since I was two years old, which has given me, and others who’ve seen me play, time to understand my strengths and weaknesses as a player. One of them being that I’m a perimeter threat because I can shoot from the 3 well. However, many people have not spoken too highly about my other strengths until recently such being a floor general, orchestrating the offense, playing better defense, or improved athleticism and speed. People get to critique and/or admire my game for me being a shooter or more than just that. A team player, A consistent gym rat, An experienced young man of the game, An offensive threat, and hopefully, a leader. I have to strategize how I use my strengths a little differently but also based on what the defense gives me in game situations. For example, instead of relying on the 3, I may have to take advantage of the mid-range game more.