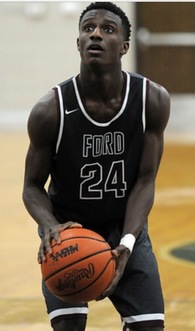 For the past 5 years, I have been a 3 sports athlete that includes football receiver/safety, track & field 4x4, 4x1,400m, and basketball H.S., G/F/C and AAU.  My goal is to compete academically and athletically. My mother has always taught me that academics comes first before anything. My mother is very firm and always would say to me she will not allow me to go back and fourth when is comes to my school work/grades and sports. What I mean by that is one week your ineligible to play and sitting on the bench and then the next you good to go because you brought your grade up.

My mother wasn't having that, I did that one time and she said if it happens again she was taking me out for the season.  It was one way with my mom and that was to keep great grades no matter what, and not just for sports. With that being said, I look to be at a university that help me succeed academically and to be able to learn in a very humble environment.  I am very responsible, genuine,  hardworking, and very coachable. I look to succeed and willing to learn more to help me perfect my craft/academics/athletic skills.

My intangibles are as follows: I give a million plus in my academics and athletically. I play with the highest energy and always pumped and ready to go to uplift my team mates. I play with a lot of passion, aggression, focused, positive and believe you can never stop learning. I am a  leader and always represent well.

Please take a look at my list of accomplishments over the past 5 years.

I am a Member of National Society of High School Scholars. Showcases/Camps McDonalds All-American Recreational Debut with Dennis Bell & Greg Kelser 9-2015, Scouts Focus with ESPN John Stovall 10-2016, and High School All American 4-2016. I also represent his school Henry Ford II , Ford Falcons for Macomb county with other students from varies school on subjects such as bullying, peer pressure, and diversity. We meet with the school board of directors for these discussions.

I received an invitation and competed at The United World Games Tour 6-2017 representing  the United States Basketball U19 team at in Munich Germany. I also received a personal invite from Prep Hoops Top 250and will be competing on Saturday, 9-23-17 at Corner Stone University at 9:30 am. Thank you so much for taking the time and considering me as a candidate to represent your school academically and athletically.