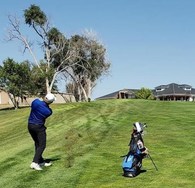 My name is Cameron Lampe and I am currently a sophomore at McCook Community College in McCook, Nebraska. I attended Fossil Ridge High school in Fort Collins, Colorado, and graduated in 2017. I began playing golf as a freshman and averaged in the low 90s but fell in love with the game right away. I played varsity my sophomore year and lowered my average down to the low 80s. Due to hard work and learning as much about the swing and game as I could, I continued to improve my junior year, averaging around 77 and earning third team all-conference. Over the summer going into my senior year I played on the Rocky Mountain Junior Tour or (RMJGT). At Buffalo Run Golf Course in Commerce City, Colorado. I shot rounds of 74-70 to shoot even for the tournament and earning a tie for first. Two weeks later, I played Fox Hill Country Club in Longmont, Colorado. I shot three over 73 the first day leaving myself two shots back going into the final day. The final day was very windy making scoring conditions tough, though I stayed focused and shot one under 69, winning the tournament by 9 shots. My senior year did not go as well as planned, averaging a 76 throughout the season but there were bright moments. At the Old Course in Loveland, Colorado, I shot an even par 72 to tie for the win in an invitational tournament. I shot another even par 72 at Legacy Ridge Golf Course to take third. Finally, I shot a 2 over 74 at Saddle Rock Golf Club to take fourth in Regionals to help my team win the tournament.

I wanted to continue my golf career after high school but had limited offers, therefore choosing to play at a junior college. I knew I could continue to improve at a quick rate due to my work ethic. Last year I won our region in the overall point standings with a 75-scoring average. I had two wins my freshman season. At Riverton CC in Wyoming, I shot a one over 73 in tough conditions to win a rain shortened event. At Heritage Hills Golf course, I shot a 72 in another rain/snow shortened event to win. My best tournament total last year was a 70-71, 141 in La Junta, Colorado. I took second that tournament.

I have gotten off to a hot start this year. Over the summer I played in the Fort Collins City Championship, shooting a one over 73 and one under 70 leading up to the final day which was cold and raining throughout the round. I shot a five over 76 the final day to shoot five over for the tournament to take third place. My first college tournament this season was a little disappointing, I took fourth shooting 77-75 to shoot 9 over for two days at Riverton CC. My next tournament was at Cottonwood golf course in Torrington, Wyoming. The first day I shot a 2 over 74 with many missed opportunities throughout the day. The second day I birdied 4 out of my last 5 holes to shoot a tournament best 68 to win the tournament with a 142 (-2). Last week our team played the Northeastern 18 golf course in Sterling, Colorado. I opened the tournament with a -4, 67. I was in the lead by one shot. The second day I shot one under to finish second with a 5 under 137 total. So far this season my scoring average is a 71.8. I have been improving rapidly and continue to strive to get better.

In High school I had a 3.2 GPA and scored a 22 on my ACT. Throughout High School I was involved in DECA a business program that teaches students real life business information. My senior year I qualified for DECA State competing in sports and entertainment marketing as well as a business model in which I wrote a thirty-five-page manual on my business, which happened to be a hi-tech driving range. My manual scored top five in the state, earning me a spot in the national competition. DECA taught me a lot about business especially about accounting and marketing. I am seeking a business major after my time at McCook Community College with hopes of majoring in marketing.