Feirish Nor Feizal Nor ‘21 Recruiting Profile 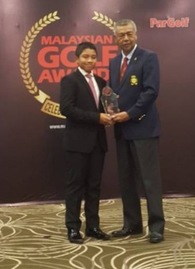 As I quote my father, " Golf is a representation of life and how you behave while playing the game will reflect on who you are as a person".

My parents have always been there supporting me through my journey to play collegiate golf in the United States of America and I am forever grateful to them. I have been dreaming the day I get to represent a college team for a while now as I became aware of the whole new experience it offers. Playing collegiate golf will provide me the launch pad towards achieving my dream to play in the US PGA in the future.

Growing up, I was introduced to many wonderful things by my parents which contributed to my growth as an individual. I hold my first golf club at the age of 4 but only started playing competitively at the age of 7 due to facilities limitations at that point of time.  I was awarded as The Best Malaysia Junior Golfer of the year 2015 for my achievements in golf.  I was the only golfer ever won the double Grand Slam for both Junior Tours in Malaysia for 3 years in a row.

Besides playing golf, I learned the art of playing guitar at the age of  9 and developed the interest in classical music. While playing my guitar, I lose myself to the harmonious sound released from each string and chord that I played in which then puts me into a whole new dimension. After playing any tournaments or when I feel stressed I would normally play the guitar till my heart's content and that instantly calms me down. I am also a Tae Kwon Do enthusiast and currently holding a red belt.

I attended to Tenby International Schools in Shah Alam Selangor. In the year 2014, 2015, 2016 and 2018 I represented the state of Selangor and won Gold Medal in the team event at the National Schools Golf Championship.  In the span of those 4 years, I also won 1 Gold, 2 Silver and 1 Bronze in the individual category.  I strive to be the best in everything I do and I do not give up until I have achieve my goals which is to play collegiate golf and ultimately being the first Malaysian to win the PGA Tour tournaments.  One of my recent greatest achievement is being selected to play the British Junior Open held at the home of golf St Andrews, Eden course this coming July 2018. I am very confident that during this tournament, I will acquire tons of valuable experience as I would be competing against the most outstanding world-class players from around the globe.

In college I am determine to play golf to my full potential and win lots of tournaments. I want to gain as much experience as I can while playing golf at the highest level as an amateur. While doing this I will not set aside my academics as I strongly want to be good at both golf and studies. Finally I want my country and my family to be proud of me.  Also, i have a sister who is currently on golf scholarship studying in the University of Charleston, West Virginia.  Her name is Sarah Feizal and i want to be like her some day.