College Coach? Click here to view all of Trevor's information. 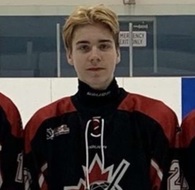 My journey began with the first time on skates being in August 2012. My father met a former NHL player, Craig Conroy, and they connected based on similarity of training and team approach with military. My parents signed me up to a 'competitive' hockey camp without knowing what that meant, bought a hockey-box and let me go. Despite being barely able to stand, I continued to work through the camp and learn basics. I was 'all smiles' and remember enjoying the experience. I was fortunate that my parents met Pat Malloy at Peak Academy,  a former Buffalo Sabres skate coach, during the same week and decided to register me in their Long-term Athletic Development (LTAD) program.

I worked for several years to learn to skate with Pat, despite being consistently picked on with my AAA 'peers'. I continued to train at Peak Academy, putting in 1000+ hours annually, plus summer training and league play from that point onward.  My academics had never been a problem, my parents have told me they wanted me to have balance through sports, as I was excelling academically.  (I average 85-95% "A "student enrolled in academic program)

I have moved up steadily from being a 'pylon' in house hockey, to one of the faster athletes in the top tier hockey.   My parents arranged playing opportunities in Europe, as I worked hard throughout the summers to improve.  This provided diversity in coaching styles, international exposure and a balance between hard-work and enjoying the experience.

In 2015, my parents relocated and joined the western Canada which changed my life but not my hockey program. I continued to work at the North Shore Winter Club, with additional coaching from Mats Lindgren, and trained to further advance my level of compete in league play.  I continued to work through adversity and the challenges due to relocation, maturity and physical development .  Through off-ice coaching, I have recognized the level of training required to step-up my game and focused in Summer 2017 to advance my play.  Despite some challenge, including an early injury in 2017 Season at Okanagan Hockey Academy, I maintained my training and focus on my LTAD.  I overcame some significant life adversity during this season, became more independent through billeting (at 14) and began to recognize the mental side of the game that had been holding me back.  I trained hard to make the Elite 15 Pursuit of Excellence team in 2018; a challenge considering my injury.  I am matching players at the same stage of similar physical growth, despite my fewer years in hockey, due to my persistent LTAD program.   I had a late groin injury in 2018 season and have since fully recovered.  This year, 2019, I am playing Midget Varsity at Pursuit of Excellence and growing fast.

I have renewed my focus on work ethic, dedication and coach-ability over the last season.  My academics are a non-issue as I excel in this area and further provide support to my peers.

I have great skating skill, my hands are good and developing further, and I have learned the game. I am working on improving my physical capabilities as my body continues to grow.  Without providing specifics, I have been fortunate to have survived by persevering through difficult life-lessons and remain resilient today. I have billeted for three years, moved 4 times in the last 5 years, including a move across North America, as well as changed school each year in the last 4. I have a solid foundation of independence and life experience that will help me and my teammates to thrive.

I am a solid, smart player that is developing at a fast pace.  For career after hockey, I plan to become a doctor with my goal currently set on becoming a surgeon.  I want to find a team and a coach to work with on my LTAD program, to reach my potential in the game of hockey, my academic studies and life.

Yes. All my courses are in the academic (AP equivalent) versus general studies.