College Coach? Click here to view all of Marcelo's information. 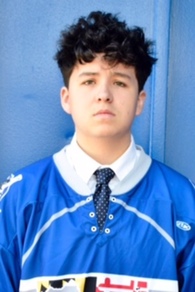 I am 5'10" goalie and weigh in at 180.  I have a commitment to health and fitness in order to be able to achieve my athletic goals.  I live in Kensington, MD and currently play hockey for the EHLP U19 New England Wolves in Laconia, NH.   Prior to that I played hockey, not only for my high school (St. John's College H.S.) as starting varsity goaltender under Team Maryland's hockey director Gregg Marinari , but also for the Howard Huskies U18AA and Maryland Selects U18AAA.  I have played hockey for most of my life,  but became serious about it and started focusing on only the goalie position my freshman year of high school.  My high school GPA is 3.2 overall.  I scored a 25 on the ACT and a 1120 on the SAT.  My academic strengths are in science, math, history/law.

Because I came relatively late to my focus on being only a goalie,  compared to some other goalies, I have had to work twice as hard with my goalie coach, during summers and breaks, and especially during the season to improve.  I give 100% and make virtually every practice and game.  I am always liked by my teammates and coaches.  My goalie coach has said that I am a good student of the game because I listen, work hard and take instruction well.  My ability to focus and stay calm during games, even if we are losing, is one of my strengths.  I try to not lose my cool on the ice, as a focus of my mental game, so I can stay present and keep blocking shots.

I am looking for a school where I can not only continue to challenge myself and advance my goalie skills to a higher level, but also one in which I will be academically successful.  I am open to different options since I know there are a lot of good programs and schools out there.  I would prefer to stay in the Northeast to Southeast/Mid-Atlantic region.   Although, I will not rule out a great opportunity elsewhere.  My dream is to play  the highest level college hockey that I can.  So I am currently playing Junior hockey in order to improve my game even more.

Finally, in addition to hockey, I have gained valuable discipline skills through 7 years of participation in the Army Cadets and H.S. JROTC.  I have achieved leadership rank and responsibility in both of these programs.  They have helped me to become a better and more well rounded person both on and off the ice.