College Coach? Click here to view all of Matthew's information. 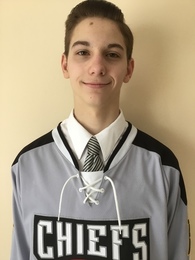 Hello, my name is Matthew Lisowsky. I am sophomore and attend William Fremd High School in Palatine, Illinois. I am about six foot and weigh roughly 115 pounds. My favorite position to play is Left D. I began playing for the D211 Chiefs while in eighth grade for the spring season. I have been playing for the Chiefs for two and a half years.

I started skating at four years old at a learn to skate program. I got introduced to hockey by my father. I skated at the Sports Complex and West Meadows. I started to play hockey for the Rolling Meadows Renegades when I was 5 at the Mite level. I progressed through all the levels and played eight years and have spent most of my time playing defense. Throughout those eight years, with mainly the same team we have won multiple tournaments, have came in second several times, and had at least one undefeated season.

I have always loved being on the ice; it has always been a passion of mine. I spend my free time watching NHL on YouTube and TV, and playing the latest version of NHL on XBOX. I always like getting dressed quickly to go out onto the ice to get the most ice time. I also spend a lot of time on the outdoor rink that my dad built for us to skate on. Whenever I get that free ice time it reminds me of the moments that my twin brother and I had as children when we fought over who our mom was going to dress first. I would love to continue these types of memories through college, and that is a reason why I would love to play at the college level.

I have attended several hockey camps, but my favorite was the Lake Forest Academy camp. On a non-hockey note, I am an active Ukrainian Scout. I volunteer throughout the year outside of school. I also belong to the CAD Club and Spanish club at school. I attend a three week camp in Middlefield, OH, every year, were we learn survival and scouting skills. I am interested in becoming an engineer, not sure which type but I am leaning towards Civil Engineering with a focus on Architecture. On my down time I enjoy relaxing and hanging out with my family and friends.

Some of the achievements that I have received through my hockey career includes several awards. When playing for the Renegades my Peewee year I was chosen by my team as an assistant captain. This didn’t just make me very happy, it made me want to continue improving for myself and for my team. Another award that I am very proud of is, as a freshman, I was awarded defenseman of the year for the Chiefs JV team. This award has made me want to strive to earn it again this year. These awards have increased my confidence to play at the highest level of college hockey I can.