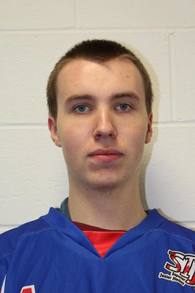 I am a 6'3" / 170lb. goalie from Warroad, Minnesota.  I am currently playing for the Minnesota Iron Rangers (Jr A) in the Superior International Hockey League.  I started the 2015/16 season with the Selkirk Steelers (Jr A) in the Manitoba Junior Hockey League, and was traded to the Iron Rangers on October 5, 2015.  I graduated in 2015 from Warroad High School with a 3.55 GPA, ranking 20 out of 70 in my class.

2014-15 was my third year of varsity hockey and I started every game, playing 1456minutes. My statistics were 2.1gaa, .926sv% with 7 shutouts,1 assist and a record of 13-13-2. I received All-Section and All-Conference honors, and was selected to play in the Section 8A/AA All Star game. I was also named team MVP and received the Old Dutch/Minnesota Wild Hobey Baker Character award.

My Junior season I also started every game, playing 1367 minutes. My statistics were 1.84gaa, 915sv% with a record of 22-4-1, 7 shutouts and 1 assist. My team advanced to the Section 8 Championship, losing 3-2 in 2OT to the eventual Minnesota State Class A champion.

Hockey has always been a huge part of my life.  I started playing when I was 4 years old, and have always pushed myself to play at the highest level possible.

Through my youth hockey years, I played AAA hockey in the off season, and multiple years for the North team in the Minnesota Selects and Elite Classic Tournaments. I was also selected to play for the Advanced 16 and 17 teams the last two years.

Some of the qualities I would bring to a team are being very vocal on the ice and a leader in the locker room.  I have had to be a student of the game and take responsibility for my training  since my team did not have a dedicated goalie coach. I am a very coachable player, understand my limitations, and believe that I bring a lot of upside potential to a team that would be willing to invest in helping me develop further.

My goals after graduation are to play junior hockey at the highest level possible, followed by college where I intend to pursue a degree in  Physical Therapy.  I would ultimately like to work in Athletic Training and Rehabilitation, as well as helping young goalies with their development.