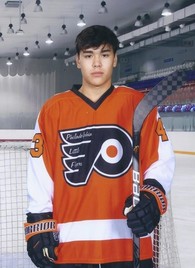 I have been a starting Varsity defenseman since freshman year.  I was a Captain of my Squirt Major, Peewee Major, and Bantam Major teams.  I have been invited to play for several select teams, going back to my Squirt years.  I played for the Susquehanna Selects, 621 Selects Hockey, the Philly Force, and a few others. Each was coached by Tier I coaches from the Junior Flyers Hockey Club, the Little Flyers Hockey Club, and the Palmyra Black Knights. In the 2019-20 season, I was nominated for the Delaware Valley Hockey League (DVHL) and the Inter-County Scholastic Hockey League (ICSHL) All-Star Teams. During the 2020-21 season, I was nominated for the ICSHL All-Delaware County Team, All-ISCHL Central League First Team, and the All-ICSHL Second Team.

I am a multi-sport athlete.  I played club and school lacrosse. Playing midfield helps my defensive hockey game by developing my offensive-defensive abilities.  For example, on the ice, my Varsity coach often puts me on the left side of the umbrella during power plays, and for Club, I am at the top of the strong side for the overload and the top for the umbrella.  Lacrosse helps me see my hockey game differently, and control the plays without rushing or forcing them which can result in turnovers.   In addition, I play golf and was on the Haverford High School Varsity Golf Team my junior year.  Golf makes me slow down and think about each stroke.  Through golf, I have learned to slow down my thought process, play through nervousness, and persist when the game is not going my way.  Participating in multiple sports is also helpful to meet, play with, and learn from new teammates.

I work hard off the ice as well. I have an unweighted 3.805/4.0 GPA.  I am enrolled in Honors-level courses, which are fast-paced and demanding.  I was also selected for the year-long Medical Careers program.  When I face a challenge in school, I ask for help. I am determined to do well academically.  I also play the cello, which I learned initially in kindergarten and have been playing continuously since the fourth grade. In seventh grade, when I started taking music seriously, I began weekly private lessons.  My high school orchestra is like a team--everyone plays a different part in a musical piece.  Playing a musical instrument is an activity where you must maintain attention and music teaches me focus.  I am a well-rounded student-athlete, who is able to juggle and excel in academics, music, and athletics.

My goal is to play competitive, collegiate hockey.  I am a strategic defenseman, who is a strong skater that thrives in fast-paced, demanding environments. I bring to my team dedication, leadership, and a positive attitude.  I give 100% effort to my team and coaches.  As I continue my hockey career, I strive to improve my game as I play at higher levels.  As a member of your team, I will be coachable, demonstrate sportsmanship, and bring passion to the ice every day.