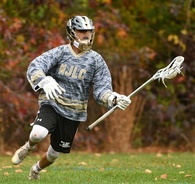 My name is Alec Jones and I am a member of the Class of 2021 at Notre Dame High School in Lawrenceville, NJ.  I am from Chesterfield, NJ and have played club, school and recreational lacrosse for nearly 8 years now.   I know I have what it takes to help your team win.  I have been playing lacrosse since I was 9 years old and I would love to play high level lacrosse in college while pursuing a degree in Business & Information Systems at the same time.  I currently have a 3.7 GPA.

I am looking to find a program that will build on my strong work ethic and team play.  Although I have mainly played midfielder for  8 years at the club, middle/high school & recreational levels, I am capable of playing the attack position.   I have a highly developed lacrosse IQ that allows me to play both a structured offensive game plan, as well as more creatively on the fly.   I have both an offensive arsenal as well as a defensive game.   I am a left handed player with a strongly developing right hand.  I have played for the NJ Lacrosse Club (NJLC) for 7 years and now have been a varsity member of the Notre Dame High School Men's Lacrosse team, since early in my freshman year.   As a freshman, I immediately earned a starting position on the JV team and before mid-season of my freshman year, with the support of both coaches and players was given an opportunity to play up on varsity, gaining significant playing time.

Some of my proudest lacrosse accomplishments include:

During my Spring 2019 high school lacrosse season, I earned a varsity position with my high school team among a large and talented group of seniors and juniors in a year we went undefeated as Colonial Valley Conference Champions with a 10-0 conference record.  We ended our season with an overall 13 -3 record.  I was honored to play extensively throughout the season contributing to a dream season.

On December 6 - 8, 2019, I was selected as part of the 2021 NJ National Team, to compete in Las Vegas at the Adrenaline Lacrosse Blackjack Classic. This was an awesome recruiting experience.  I really loved the level of competition as well as the variety of NCAA college lacrosse coaches at this tournament.  My team earned a spot to compete in the Blackjack Classic Championship.  We went through two days and 5 games against teams from around the country.  Our NJ National Team fought their way in with a number of come from behind wins securing a 4-1 record to get into the Blackjack Classic Championship.  We played against ADVNC SF 2021, ultimately losing a hard fought battle against a very accomplished team from San Francisco.  Our team showed tremendous heart and resilience.  I personally had a number of momentum shifting goals helping my team to play from behind, winning some very competitive games.

Selection to the 2019 Inside Lacrosse Summer Invitational All Star Team - Made a significant impact for Team Black and received press from Terry Foy: "Perhaps the highlight of the game belonged to Team Black middie, Alec Jones (NJLC), who finished with two gals and an assist, including the game -tying goal with 1:00 to play.  With 2:22 to go in the second quarter, he beat his man with a beautiful left to right split dodge, stepped back into a shot and beat the goal through a screen -- the shot froze Blind, who never saw the ball."  Terry Foy also tweeted "Alec Jones had one of the meanest goals I've seen this summer."

Selection to the “All Star” team at the 2017 Delaware Hotbeds

Invited to the NXT Philadelphia Boys Showcase in 2018