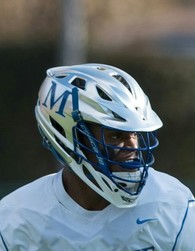 McCallie School is one of the best academic schools in the country. When I graduate, I'll continue my education at a competitive university while playing lacrosse for a top program. As a freshman boarding student, I learned the importance of being responsible, humble, and persistent in all that I do. The most challenging thing for me was balancing my study time with athletic responsibilities and social life.  Although I improved as the year went on, there is still progress to be made.  I am fully committed to becoming the best student-athlete I can be and now understand that it's all a process.

Our sports programs are very competitive!  I play local club lacrosse and worked out daily during the fall. It gives me a chance to play with guys from the previous year's varsity team prior to basketball season.  I spend winter on the basketball court as a point guard.  We had a great 2014-2015 season and I learned a lot about the sport from some really good coaches and even more about myself as a person. When the spring rolls around, I'm ready to hit the lacrosse field.  Last year, I was a little unsure of myself during tryouts so I worked out for the JV coaches. After our scrimmage the Varsity Head Coach, Troy Kemp, told me that I would play for him.  It was an awesome experience.  I was given a fair amount of playing time and was the only Freshman to letter in lacrosse this season.  We ended the season with a record of 19-2 and state championship.  Although we didn't get a "W", the highlight of the season was probably our game against Landon in Maryland.  It was a tough game but they beat us 14-9.  We'll probably play them again in 2016.  Over 15 of our players committed to universities last year.  Most of which were to D1 schools.  We ended the season ranked #1 in Tennessee, #3 in the region, and in the top 20 nationally according to MaxPreps. I played on the second and third midfield lines and scored against some top tier teams.  My coaches and trainers also helped me increase my shooting speed to 95 mph with my right hand and 90 mph with my left.  My 40 time is less than 5 seconds and I believe 4.5 seconds is within reach.  My 5-10-5 was recently timed at 4.3 seconds.  Finally, in addition to playing in all of the Varsity games, I was able to play in most of the JV games and earned Offensive Most Valuable Player.  Honestly, I couldn't have imagined a better Freshman season.

My summer travel team, Team 24/7, typically plays tough competition.  This season we competed in UpLax, MadLax, Long Island LaxFest, and the Philly Invitation Showcase. We played as team and won games against a number of really good clubs including Rough Riders (MD), Tomahawks (NY), Titanium Lacrosse (OH), and MadLax (MD). We played against Long Island Express, 3D-Tristate, and Team Carolina also. I competed in the 2015 Brine All-America Classic and was selected for the National All-Star Team.

Due to my travel study schedule, this is the first summer that I haven't been able to volunteer as a Mentor and Coach for the 1sTouch Youth Development Program.  It's one of the ways I try to get involved in the community. Volunteering is important to me because I am able to teach younger kids how to play the sport that I enjoy while helping them develop good character.

I always look forward to returning to school. This year is no different. I have something to prove. Last year wasn’t a good representation of who I am as a student. Although my grades improved as the year went on, I didn't achieve my academic goals. This will be a much better academic year for me and I'm eager to get things going. I've adjusted to the transition from middle school to a really academically challenging high school and have a better understanding of what it takes to be successful as a boarding student. I know my experience at McCallie is helping to prepare me to be the best possible student-athlete in college.