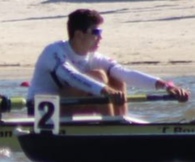 For as long as I can remember, I have always wanted to push myself to be the best I can be.  In academics, sports, or anything really. I started rowing in sixth grade and quickly realized that you will get out what you put in. I fell in love with the sport.

In my first year of competition (seventh grade, 2017-18, age 13), I raced novice, freshmen, and U17 events and won a relatively good number of races, including a state title (FSRA) in the Freshmen 4+, and fourth in SE regionals in the U17 4+. I won the most improved freshman award at the Miami Rowing Club (MRC). I also started rowing and racing a double we knew was good for the coming season.

In eighth grade (2018-19, age 14) I medaled in even more races, racing only in freshmen and U17 events. I was invited to row at the 2018 Head of the Hooch with the varsity team. My double partner and I started polishing our technique early in the year in anticipation of the state, regional, and national championships later in the season. We finished first in the Miami International Regatta over our cross-town  rival. We also finished first in the 2019 State (FSRA) and again in the SE Regionals in Tennessee with the same double. As a result, we were the only boat selected by head coach Cesar Herrera to represent MRC in Camden, NJ at the 2019 U17 National Championship. At U17 Nationals we finished sixth out of 33 in the time trials on Saturday, barely qualifying for the Final A due to a technical problem in the boat. However, in the Final on Sunday, we finished 4th overall. We were extremely proud of the result, our dedication and hard work. We are even more determined to do better this year when we return to Camden for the 2020 U17 Nationals.  During the season we also came in second in the state (FSRA) in the Freshman 4+, as well as 3rd in SE Regionals in the U17 4+.  I received the outstanding freshman of the year award as well as the best erg award at the end of the season at MRC.

In May of 2019 I was invited to participate in the youth program for the Puerto Rico national rowing team (PUR) and attended a FISA sanctioned international development camp and Central America Regional Regatta in Puerto Rico. I plan on returning this year for the same event and look forward to the possibility of representing Puerto Rico in international competition in the future.

I am currently 15 years old (2019-20), a freshman, and have moved on to the MRC varsity team. I was invited to stroke the youth four at the Head of the Charles Regatta  in 2019, one of only two boats selected by Coach Herrera to represent MRC in Boston. I was also stroke for both the Youth and Lightweight 8+ as well as the youth and lightweight fours at the Head of the Hooch. On January 25, 2020 I won first place out of 54 rowers at the indoor Miami Shake-an-Erg competition (2K) as a Freshman Lightweight. On February 15, 2020  my double came in first place in the Final A at the American Youth Cup (2K) in Sarasota, FL in the Mens Ltwt Youth 2X. In fact, our time was better than all 31 entries in the Youth 2X, regardless of weight. We came in first again in our heat with the same double in the Boys HS 2X at the Sarasota Invitational on February 22, 2020, with the second best time out of 34 entries.

So far, I have participated in a total of 32 regattas, racing between 1 to 4 races in each. I have put together a detailed summary of my rowing experience to date which is available on request. I am very ambitious and like the concept of working hard to attain success. I have made a full-hearted commitment to the sport of rowing and always look forward to the challenge of improving in every aspect of my life. I take every opportunity to work towards improving my erg times.  It was a privilege to be selected to represent MRC at the Head of the Charles last year and the Hooch the last two years. These were incredible experiences where I obtained first hand exposure to collegiate rowing in the same venues. I am now more focused than ever to compete at the collegiate level.

I have been an honor roll student for the past 23 consecutive quarters. Last year I was president of the National Junior Honor Society and recognized for academic excellence. In October of 2019 I scored in the 96th percentile in the PSAT. I take the same approach in academics as I do in sports.