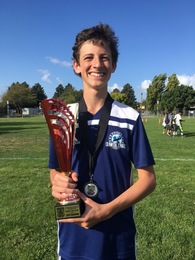 I am Miles Tennant. A little background on me: I was born in Los Angeles but moved to the San Francisco Bay Area within the first six months of birth. I lived in San Jose until first grade when we moved across the mountains to Santa Cruz and more particularly, Aptos, CA. It was then that I discovered my love for the game of soccer. I was introduced to it by classmates in third grade and it stuck instantly.  This was at the age where getting tired doesn't really exist and it quickly got to the point where my parents wouldn't come to pick me up until five o'clock or later so that I could play soccer after school with my friends. Those long small sided pickup games were by far the greatest part of the day and they made me a much better player rather quickly.

I attended private school up until the end of junior high. At that point I decided I wanted to move to a public high school to get the high school soccer and high school experience. I took the mentality from one of my inspirations, Jimmy Conrad, that the coach never cuts the hardest working player and I carried that into tryouts for the high school team. It paid off and I made varsity as a freshman.

Since then, each year has been an improvement and at the start of my junior year I accepted the offer of being team captain. The team we had was the best I had been a part of up until that point and during our push for the playoffs at the end of the season I got a minor tear in my MCL. This was an extremely difficult time for me mentally because it took me completely out of the playoff attempt. Falling in the semi-finals the next week was a very eye opening experience. I watched totally incapable of helping the situation as our seniors played their last game. While I watched the reaction of the seniors it hit me that if I was going to keep going the same way I was, I was going to be in the exact same position they were in, in just one year, having lost a game that ends my high school career.

Like the rest of the world, I was stuck within the next few months of that game due to the global pandemic but having recovered from my injury I have my eyes firmly set on a successful senior year. While some people might decide to sit around because they can't go outside, I am using every inch of space I have to my advantage.

I have a very competitive mentality and along with that, the belief that my mind must be in the right place to compete before I have any chance of success. If I think I am going to lose, my chances of losing are much larger. In turn, if I truly believe that I will win, my chances of winning increase greatly. My competitive mindset means that I hate to lose and I will do what I can to make sure that I win. I review the matches I play and make note of what I should have done better. Then, I take that information into training and work on the part I struggled with. Improving weaknesses to make them strengths is what makes a bad player good or a good player great.

This sport has been my life and my dreams for many, many years and it will continue to be for as long as I can imagine.