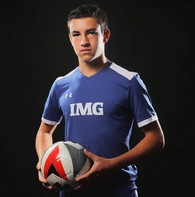 - Grew up in Europe (Switzerland)

- Speak 3 languages: English, French and Spanish. I have also studied German for 3 years and Latin for 1 year

- Was asked to join IMG Academy when I was 13

- I have had a life-long passion for soccer. My parents swear that I started kicking a soccer ball the same day that I started walking when I was 9 mos. old

- Began playing Select Soccer at the age of 7

- Played in Switzerland for 5 years before relocating to the U.S., when I was 11

*NOTE: Sat out first half of the present season owing to a broken clavicle.