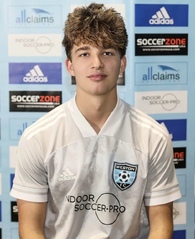 Soccer has been my passion since I first started playing at the age of 4. I started playing competitive soccer at age 7 and was selected for Weston FC's top team.  Five years ago I was selected for the Weston 2004 DA team. I have been the starting center defensive midfielder for 4 years and the team has had great success and is ranked number 6 in the U.S. I have gained great playing experience as the team has competed in high level tournaments in Oviedo, Spain and Rome, Italy in addition to the DA league games, Showcases and Playoffs. The team also competed in the Copa Rayados tournament in Houston Texas against MLS teams and Mexican professional teams winning the Bronze division. The team won the DA Southeast Division title and was the only non MLS team to win its league and compete for a national championship in San Diego in June, 2019.  For the 2019 season, I was a part-time player on the 2003 Academy and a starter on the 2003 Academy Reserves. I am very dedicated to improving my skills, strength and nutrition. When I am not training with the team, I am participating in individual training in both soccer and fitness.

This June 2020, my sister and I are spearheading  an initiative called "Second Chance Soccer" through my club, Weston FC. Second Chance Soccer is a clothing donor project which will be spotlighting our global collective collaboration with Food For The Poor (FFTP), an internationally known Christian ministry that provides food, housing, clothing, healthcare and education to the poor in 17 countries throughout the Caribbean and Latin America. My sister and I have been working with FFTP and we will be organizing, coordinating and collecting both sets of the Club's retired Adidas uniforms from last season as well as the tracksuits, rain jackets, training gear, cleats, coolers, etc. She and I worked to have Weston FC partner with Food For The Poor to donate these items to underprivileged children at an organization in Jamaica and more importantly, bring the game of soccer to children who love the sport but don't have the resources to play. My sister and I believe that this effort can help change the lives of so many children and just one jersey can give a child a sense of belonging. With my Club's help, we can all inspire and impact these children and give the game of soccer to children who otherwise wouldn't be able to play.

Academically, I have attended a private school since kindergarten, University School of Nova Southeastern University, where I have always excelled. I made the Head of School Honor Roll and am a member of the National Honor Society. I have and will continue to demonstrate the same commitment to my studies as I have to soccer.

I am a respectful teammate and player and very appreciative of the opportunity I have been given by my parents, coaches, and the Club to be able to play at one of the best soccer clubs in the country. I always try to be one of the first to arrive at training and be ready to go when the coach arrives. I take each training seriously and try to learn something each time I am on the field. Academically, I try to be a leader in my classes and help other students when they need assistance. Overall, I am respectful of others, try to help whenever I can where I see people need assistance and lead a healthy lifestyle dedicated to improving my soccer skills and reaching the highest levels academically.