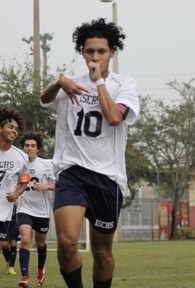 I came to the country to look for the best opportunities in my future in relation to sports and studies, I have international experience, participating in clubs, collegue  teams, state and national teams, I define myself as a creative player and I try to be different. At the time of playing, I am characterized by 1 against 1 and the ability with the passes and the good shot, I can function depending on the situation and the position that is assigned to me, I think that Latin players stand out for being technical with him ball, but talent and hard work go together, it is something that is worked on daily to reinforce skills, that also defines me.

I play since I was 5 years old, I was born in Caracas, Venezuela, I started playing in my school team and lasted most of my childhood there, until I was 12 years old, where I achieved important achievements at a personal and collective level, champions in different tournaments. and individual awards, I participated in the district league where all the capital's teams played, they were champion in the u-10, participated in the collegue league where the participation of most of the schools was developed, remaining runner-up and champion in the u12 , I participated in the most important league in the country at that time “serio oro”  where I had a good tournament, I also alternated with a club which stood out and exploded at the individual level, in this I participated in the district league remaining champion, and the national tricolor league another one of the most outstanding leagues in the country, they were the top scorer of the tournament being a midfield and undefeated champion, these achievements helped me to participate in the Caracas team for a tournament where they participated. In all the states of the country, where I did a good tournament and I was able to win the position of representing Caracas in the u-14 tricolor national team where only the best 2004 of the country attended participating in a tournament and attending 2 modules, then I went to form part of the lower divisions of the most winning team in Venezuela, Caracas FC where I played 2 seasons until I was presented with the opportunity to come to the United States where I was selected at the Miami Breakers academy and received a scholarship from them, where I performed 2 good seasons being a benchmark in the middle of the field and remaining as the maximum assistant, I was champion with Miami breakers in the Disney U-16 Showcase and in the vero beach shootout tournament and I was runner-up in the presidets cup of the florida youth soccer association and in the platantion cup in addition to participating in the prestigious MIC tournament when it was held in the USA.