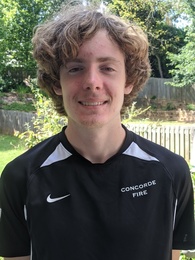 I am a player who sets ambitious goals and works hard to achieve them. I have faced adversity, and bounced back stronger.  I know how to work with my coach and teammates to understand what I need to do to improve, to help our team reach the next higher level, and I've done this repeatedly since I began playing at 5 years old.  Every personal accomplishment has been hard fought and earned by putting in extra time training, studying the game, and bringing a work ethic that is unmatched.

My standing as Captain of a national league team was not handed to me.  In fact I have worked my way up from the bottom team in my club, to being a captain and leader on the field in the best team in our region.  I am not done, I have sights on winning our State Cup, and advancing out of Regionals, and I have my sights on being a productive contributor to a college team.

I was seven years old when I had my first dream. I wanted to have a spot on the top team at my club. I wanted to be one of the best players at my club, so I worked for it. And finally, I made that still youthful dream a reality. I moved through the player-ranks at my club until I became the captain of the best U-11 team at that club.

I accomplished my goal, but I wasn't done. I led my squad from being a mid-table Classic 1 team, to being the best team in the entire region, and through this, captaining my team to countless statewide, regional, and national titles.

I have always dreamt of playing at the next level, wherever that may be. In college, I am looking for a school that will complement my academics as well as my athletics. I have always been a hard-worker in the classroom, and a college that also prioritizes their academic program would be most desirable to me. Overall, my struggles as an athlete and a scholar have gifted me with the knowledge of what it takes to be a strong leader, and a perseverant individual.

Yes. As a Sophomore, I can only take one AP class this year: AP U.S. History. As a Junior, I will begin the IB Diploma Program.