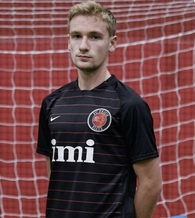 Hello, my name is William Finch. I am 17 years old and in my junior year of high school. I primarily play attacking midfield or wing. However, I am very versatile and have experience all over the field. During the 2019 spring season I was very successful with my club team, Westside United. The previous season, we lost MRL status and were placed in ISL Premier. This spring 2019 season we won our league and got promoted back to MRL. During our run, we won the Indiana Presidents Cup. We then advanced to play in Kansas for the Regionals. After winning every game in Regionals, our team achieved something that no previous Westside team had by moving on to Tennessee for President Cup Nationals. We competed against national league teams from Virginia, Texas, and defending champions Nevada. Only seven teams from Indiana have ever made it to nationals. We were proud to make it eight and placed third in the Cup and on the way beat the team that went on to win the tournament.

For 10 weeks in the fall of 2018, I had the opportunity to go to Germany and train with VfL Halle U17 Academy team. VfL Halle is a 5th tier in German soccer team. Their 02/03 academy team was one of the best they have ever had, fighting for promotion to the regional league. In my first friendly match I was subbed on at halftime and scored two goals in our 4-0 win. Even though I was only 15 I was invited to train with their U19 team several times. It was a great experience for me to be able to train with and develop to the level of these players. I improved immensely during my time there, not only in soccer but also in learning the language and understanding more of the German culture.

I played ODP for 2 years and I believe it helped me gain confidence to show my skills and compete at a consistent higher level. In a tournament I was moved around everywhere from CB to CF depending on if we needed a strong defender, a smart midfielder, or a goal scorer.

My sophomore year I was named team MVP for my homeschool high school Varsity team. Now, in my junior year, I am captain and hope to lead the team to even more success.

In the spring 2018 season (U15) my club team, Westside United, was in MRL. I had a lot of individual success that season being the league’s top scorer.

For the U14 season I was named to the All Division Team.

I plan on continuing my education studying business, so I am looking for a college that would be a good fit academically and athletically. I want a team that will challenge me and provide ample playing time.