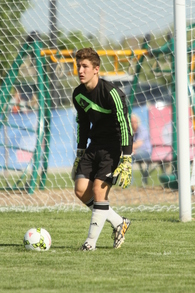 Spring 2017 - Due to US Soccer changing to birth year, I am playing for the ECU 00 Maroon team in MRL Premier II under head coach Arron Patrick.

Fall 2016 - I'm the starting goalkeeper for the varsity soccer team at Concord High School.  I have been selected to play in the Indiana North-South game on November 6, 2016.   My team is the 2016 NLC (Northern Lakes Conference) and Regional champs.  I have been awarded All-Conference First Team, All-District First Team, and All-State Honorable Mention, 2016.

In the spring of 2016, I was a member of the U17 ECU98/99 Maroon team, which finished fourth in the US Soccer National League in North Carolina and Las Vegas, Nevada.  During National League, I played 3 games and posted 2 shutouts.

In the fall of 2014, I was the starting goalkeeper for the Chicago Fire U14 US Soccer Development Academy (USSDA).  With 1050 minutes in the goalbox, my save percentage was 74.2% and I posted four shutouts .  Our team won the Central Region for the U14 Generation Adidas Cup on October 10-13, 2014.  I also attended a US Soccer Training Center on September 8, 2014. In the 2013-14 season, I attended three US Soccer Training Centers.  After the fall season of 2014, I made the difficult decision to leave the Chicago Fire USSDA team, due to the long commute daily.  Living over two hours each way decreased the time I had available to focus on my academics, pursue charitable events, and attend Church functions.

I am a hard worker and determined to give 110% on and off the field.  Academically, I am always on the honor roll and am working toward an Academic Honors Diploma.  I would like to study physical therapy in college, while playing competitive soccer.