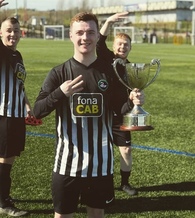 My name is Conall McKeown from Northern Ireland. I am a young footballer (age 22) I have played soccer since I was 5 years old and I am looking an opportunity to play soccer in America and go to university.

I am 5ft 7 my main position is Centre Attacking Midfield (CAM) but I can also play the Holding Midfield role (CDM). The reason I enjoy Attacking  Midfield is because playing that position you are always involved in the game if its either getting back to defend or starting up an attack. I love taking players on and create opportunities for my teammates and also scoring. My reading of the game is a strength of mine aswell which often helps me to find open spaces on the pitch and know what exactly im going to do with the ball before I even get it.I study game tapes of players like Eden Hazard of Chelsea FC and learn as much as I can from them, such as moving with low sense of gravity, getting your body infront and protecting the ball while under pressure. Also Attacking Midfield is my main position because I can use my full ability driving forward.

My main attributes would be:
My speed and acceleration
Reading and understanding of the game
Passing and dribbling
My positional play


What I believe I can improve is my strength, Im strong enough for my size but I know I can get stronger and believe I need to.

Over my playing career, I have always been a winner. I have won several league titles and cups in my time. Also a lot of individual awards such as player of the year, young player of the year etc. I have the trophies and medals to prove my achievements if you wanted proof. I have played in big touraments such as The Foyle Cup and The Milk Cup and have came up against English Premiership teams before so I know what its like on a bigger stage and what standard of football is required. Few years back I was on trail with Tottenham Hotspurs and several times for my country Northern Ireland and also was a player selected to train in an academy took by coaches from the four clubs which were Nottingham Forest, Watford, Sunderland and Chelsea but unfortunately I got a bad knee injury which destroyed my chances really. But now a few years on im back to 100% fitness and back to playing to my standards and now looking to move to the US to play.


I know I will strengthen any team I play for because my passion for the game and to get the win is like no others. I give 100% every time I step onto a pitch if its either for training and playing a match.

I can also prove these stats also with trophies and my club's stat sheets from the last few seasons.

At the moment I am currently playing in the top amateur league in my country which is called 1A.

As you can see im a winner its just my mentality. I would love to get the chance to come to a university  and play soccer for the team. I know I will bring something different to any college team style of play and I will push my team in training and matches to get the best out of them for the team. Im just looking that one opportunity to do so.

Its always been a dream

of mine to move to the states and play soccer. Im 22 years old now and im hoping for that one opportunity to take and go for it.

I have attached a short highlight video. I would like to apologise is advance for the quality of the video but it was the only way to send it unfortunately. I am working on getting more highlights on video to send also.


You give me the chance to come to the US and play soccer I can guarantee you that you wont regret it. I will give you 100% every game and training session and do everything I can to bring the team to the next level.


If you have any questions at all please get in contact I will happily answer them or I can even give you several of my coaches contact numbers to talk to them. Thanks for taking the time to read this.