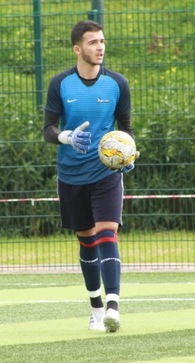 Like many others, my childhood dream was to become an international soccer superstar - the next Messi. I fell in love with the sport in my youth. Where others saw a parking lot, a backyard, or, frankly, any level patch of grass, I saw my very own Camp Nou. It was then, while playing both as carelessly as a child and as passionately as a fan, that my dream was born. However, my relationship with the game slowly turned sour as I grew older and the kids around me grew more competitive. I always felt left out and was consistently the last one picked for the team. While I was just glad to be playing the sport that I loved so much, my friends and peers would reject me from their games because I wasn’t at their level. Being constantly underestimated ignited a driving force within me to prove them all wrong. Because of the adversity I faced as a child, I worked tirelessly to become a player who commands respect as soon as my boot touches the field.

It was through watching professional soccer matches that I learned that the goalie was the backbone of the team and was permanently drawn to the position that I am devoted to today. After all, with my skills at the time, trying out as goalie was probably my only way onto the team. In the first two years of middle school I made it to the team but was benched for most of the season. The familiar sense of neglect motivated me to push myself further so when a local club coach offered to take me under his wing, saying that he saw potential in my future in soccer, in 8th grade, I immediately accepted. At first, I felt lost and lacked the physical ability to keep up with practices, but I soon realized that my success was dependent on my willingness to work. I practiced day in and day out to get better, and my effort paid off. As a result, I was chosen for the elite varsity team as a budding freshman. The standards were higher, the players were stronger, and the competition was definitely tougher but I didn’t let that hinder my determination. With more practice and perseverance, both my skills and technique improved, as proved by my status as a starter for both the varsity and club team. By the end of my high school career, I had earned the respect of my teammates, and was given the honour of wearing the captain's armband, leading them to numerous victories.

As of now, I’ve won 4 national championships and several medals. My love for soccer, the difficulties I encountered early on, and my determination to constantly evolve has also translated into a desire to push myself academically. In 11th grade, the culmination of my effort came in the form of the High School Male Athlete of the Year award, which takes both athleticism and academic effort into consideration. I felt extremely honored to receive the award, knowing the challenges I had to overcome in order to get where I am. I give credit to the endless hours of work I put into my practices and all the times I wanted to quit but didn’t.

Looking back at my younger self, I can’t help but marvel in my growth, both physically and mentally. I’ve instilled discipline in myself and I’ve become a better athlete and student as a result. My biggest lesson is that perseverance is invaluable and that I can achieve anything I want to in life with a diligent mindset and the willingness to put the work in. It’s not enough to just want it, the work ethic has to be present. I believe this is what I bring to the table and will be the backbone to my future success.

If you Can, you Will.