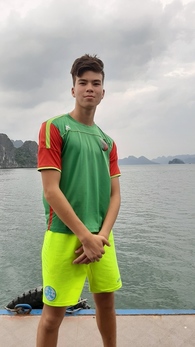 Hi my name is Leo-Minh Kustermann. I am 17 years old and currently the goalkeeper of the club Vfl Kirchheim/Teck. We play in the Verbandsliga, the third division in our age. I would like to study in the United States of America because I aim for new experiences and I think it is the best opportunity for me to combine soccer with my academics.

I have played for several different teams, the Sv Stuttgarter Kickers, FC Esslingen and Vfl Kirchheim.

(U14)The SV Stuttgarter Kickers is a very competitive team and plays in the youth Bundesliga against teams like Bayern Munich, Eintracht Frankfurt etc. Due to the extreme effort I had to invest to play there I decided to swap to the Fc Esslingen. I had to invest 4 hours each day only to get there.

(U15)The Fc Esslingen is also a very competitive soccer team. It is a very young club, founded in 2011. Nevertheless it is one of the best teams in our state. We won against most teams of the Oberliga (2nd youth division, teams like Vfb Stuttgart U14, Hoffenheim U14 play there) and were able to get promoted to this division.

(U17) I remained at the Fc Esslingen and we were again a competitor to be promoted to the Oberliga. But we failed due to unnecessary mistakes and also because of the Corona crisis because we were not able to finish all our matches. We also won against KSC (Karlsruher SC), Sonnenhof Großaspach and the SV Stuttgarter Kickers; all of them are playing in the Oberliga.

(U19) This season I swapped to the VFL Kirchheim/Teck. It is my home town's club and also competitive in my age. I am one of the youngest in the team (17 years). We play in the Verbandsstaffel (3rd youth) but our goal is being promoted to the Oberliga. I also received an offer to swap to the SV Stuttgarter Kickers again but because I am going to write my A levels this year I do not want to spend so much time in soccer.

I would say that I am able to integrate myself in the game very well. When I played for the FC Esslingen I often had to distribute the ball as a center back because we wanted to outnumber the opponent with this tactic. Furthermore I would say that I am very tall and have a calm charisma, especially in catching crosses. I have a good reaction and diving,  especially because of my height and bounce.

Translating my grades with scholaro grade conversion table, my current GPA is 4.0.

I have played the recorder for 7 years but when I was 15 I stopped it. Now I play the piano for 4 years now.

In addition, I would say that I am a very committed student. I am the school's student representative and also my class's representative. I have different tasks such as planning the "SchlossNight", which is a sleepover event for the new students in the school´s sports hall; speaking with the teachers to solve the problems caused by Corona (e.g fair grading due to homeschooling) and many more...

I also lead the Sport SMV team in which we organize sport events like a school's donation run.

My friends would say that I have a very vivid personality and that I like approaching new situations and people. They would probably say that I know how to handle problems on my own very well too.

Due to Corona and the fact that we could not play any matches in that time, I could not integrate many match scenes. Therefore I recorded some training sessions.

I hope you enjoy it!

Please send me an email @leokustermann@outlokk.com if you are interested!