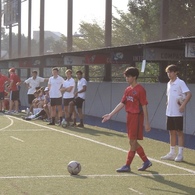 My name is Conor Monahan and I am currently in my sophomore year at the Stamford American International School in Singapore.  In this statement, I will be outlining my aspirations and goals.

It has been one of my biggest dreams in life to pursue a highly academic college education after high school while also playing soccer at the top level. I am looking for a college with a strong academic program combined with a top soccer program.

Throughout both middle school and high school, I have done well academically. I was listed on the Dean's List in grade 7 and 8 while being listed on the Honor Roll in grade 9.

I was introduced to soccer at the young age of 3 and have been loving it ever since. Throughout my childhood, I played for both club teams and school teams.

At the age of 12, I played for Singapore Cricket Club before joining JSSL FC at the age of 14 (2018).  In my freshman year of high school, I joined my school’s Varsity U19 team as the youngest player on the team. I scored 4 goals throughout the season and was the top goal scorer.

After completing my second year on the Varsity U19 team as a sophomore, I managed to rack in 6 goals and finish as the top scorer for the second year in a row.

I am currently playing for the JSSL FC Elite Under 16 team while playing for my school's Varsity U19 team. I primarily play as the center attacking midfielder for both teams.

I am a very sociable, easy-going person and can fit into any squad. I have a deep passion for soccer.