College Coach? Click here to view all of Adrian's information. 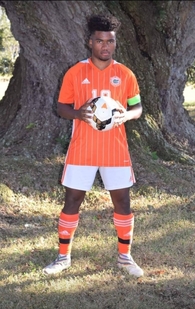 I am a very hard working, competitive person academically and athletically. I have led my team in goals, assist and steals the past three years.  Focus hard work and dedication defines everything I do in life. I have always taken as much pride in my schoolwork as well as my athletic achievements. I do what is necessary to reach my full potential as a student athlete.  By doing so this allows me to stay eligible on the field, set a positive example as a team leader and be there for my teammates on and off the field.  Sports has always been an integral part of my life.

I began playing soccer at the age of 5 yrs. old. I also play HS football as well and play beach volleyball in the summer. Growing up I played basketball and ran track as well. From the age of 5-12 I played recreational soccer. I played club soccer on the "A" team for three years with Cajun Soccer Club in Lafayette LA., I played one year with Lafayette Futbol Club. I am currently playing Club with the Dynamo Juniors Elite Team in Broussard LA.

I play forward and midfield, a key aspect of my game is my speed. Soccer is my passion and I would love to play at the college level.  I welcome the opportunity to talk to you about your program and what I could bring to the team. I am confident that my passion, dedication, and skill would be a positive addition.  I am not 100% decided on my major but it will likely be nursing.

Thank you for taking the time to get to know me!