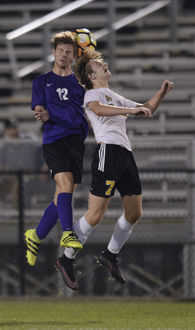 I have been participating in premier soccer since I was eleven years old.  Playing the "beautiful game" is one of my true passions in life.  During this time I have been very fortunate to compete on both the national and international level.

I was one of sixty players chosen from across the United States to train with the US Club Soccer Id2 team in Casa Grande, Arizona.  I was also chosen to be a member of the Olympic Developmental Program Region III team.  As a member of this twenty man roster, we traveled to Costa Rica and competed against some of the top academy teams from Costa Rica.

I was also selected to the Adidas Generation International Team which traveled to Madrid, Spain. While there we had the opportunity to train at the world famous Real Madrid Academy training facility, and also competed against some of Madrid's elite academy teams.  As a member of the Super Clubs National Team I traveled to both England and Ireland.  We trained at the Liverpool Academy facility, played against top clubs from England and competed against the Irish National Team

My Louisiana club team, Baton Rouge Soccer Club, has been State Champions and participated in Regionals where I served as team captain. I am currently a senior at 5-A Denham Springs High School.  As a ninth grader, I was selected to the All State Freshman Team and the All-District 2nd Team.  My sophomore season I was selected to the All-State 2nd Team, the All-District 1st Team and the All-Metro Team.  I was also selected as the offensive MVP for my Denham team. My junior season I was selected All-State 1st Team,  All-Metro MVP,  All-District MVP and MVP of my high school team.

Soccer has given me the opportunity to experience the unique cultures of different countries.  These travels and experiences have enriched my education tremendously.  I currently carry a 4.25 GPA while taking both Advanced Placement and Honors courses.   I scored high enough on my AP Human Geography, AP Chemistry 2, and AP English III test to earn college credits

My goals are to continue playing this "beautiful game" at the highest level as long as possible while also receiving a quality degree from a prestigious university.