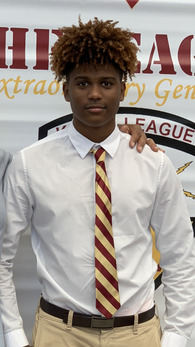 During the summers I attend soccer camps and play with the Deptford Premiere Elite Soccer Club.  When I am not playing with my high school league in the regular season conference I play in an indoor soccer tournament with my team members.  Also, I train in the winter, and spring with the Deptford Premiere soccer club.  I have played elite level soccer for four years. I have also played with the Medford Striker’s League.

For the past three years I have been a member of the Burlington-Camden Alumni Kappa League.  The goal and mission of the Kappa League is to empower youth to establish and launch a progressive career and/or to excel in post secondary education, while cultivation strong leadership skills.  My time with the Kappa League focuses on personal development, academic achievement and college/career preparation.  I participate in various community service projects with the Kappa League and my school.  I have had a strong commitment to service for others since a very young age.  I also enjoy giving back to the soccer community.  I volunteered for the youth soccer clinic at Cherry Hill West, and the Kick or Treat Tournament.

In college I plan to major in architecture.  I have wanted to be an architect since middle school.  I have participated in NOMA’s architecture program in San Francisco, California and the Urban Land Institute (ULI) Hip Hop Architecture program in Charlotte, North Carolina.  My application was selected for one of the fifty openings out of a hundred applicants seeking to attend the ULI Architecture Camp.  During my first two years of high school, I took classes in Sustainable Design.  While I have academic and career aspirations, I have been involved in the school choir, I find time to socialize with my friends, and play varsity basketball.  I am a black belt in karate, studying the form of Kun Gek Do.  I play the piano.

I plan to consider colleges that are a good match for me academically.  More specifically, colleges that have an academic program that leads to a professional degree in architecture.  I can’t think of any other sport that I love playing more than soccer.  I am very passionate about soccer and hopeful that I will be able to play at the collegiate level.  I enjoy the relationships that I have developed over the years while playing soccer.  Soccer has helped with my development as a person. Thank you for taking the time to learn more about me as a person.