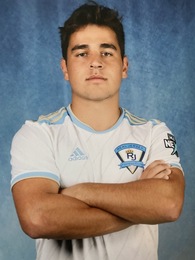 I am moving back to REAL JFC(Medford, NJ) and will be playing on REAL JFC MLS Next U19. REAL JFC is the only MLS League Expansion Team for the Philadelphia Union, and where Brenden Aaronson & Paxton Aaronson began their careers. REAL JFC has Club Affiliation with the Philadelphia Union as well as share players.  I will be playing in the same MLS Next League .  I played on this team for Coach Kopytko (Stockton University's Men's Soccer Coach) but had to move to FC DELCO 3 years ago when the clubs changed to birth year and (3) 2003's could no longer play on the 04 team. With no 2003 team at that time, I made the commitment to drive 158 miles/day from Linwood, NJ, through rush hour, in Philadelphia, to Conshohocken, PA. I completed many Honors Physics, Honors Pre Calc, & AP writing assignments in bumper to bumper traffic, while my parents drove. Now that I drive myself, that is not an option.

”Following Brenden and Paxten's path, there have now been 15 players from Real Jersey FC that have moved on to the Philadelphia Union Academy. Most recently, Kenyon Carter ('07), Anthony Washington ('07) and Jamir Johnson ('08) have joined the Union Academy. With the high level of player development coming out of the club, Real Jersey was named one of the first clubs in the MLS clubs “Pathways to Pros" program."By Evan Unger, 07/23/20, 1:00PM EDT

Real JFC MLS Next U19 will be playing 8/27-8/29/21 in the East Coast Premier Cup in Loudoun County, VA to kick off our Fall Season along with Baltimore Armour MLS Next U19, FC Delco MLS Next U19,and DC United MLS Next U19 and will post my film from the games at that time. The MLS Next U19 Fall Schedule will be out 8/1/21. I am extremely excited for this very competitive season. I know that strong academics is important to the team and I take my academics very seriously, having a 5.0 GPA this year and maintaining a 4.83 Cum GPA in all AP & Honors courses with a rigorous course load planned for next fall.