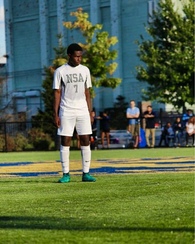 I was outside on the field with my new teammates. As we warmed up everybody was in the zone and I was the outcast. Cedar Star Academy is one of the best soccer team in New Jersey. Cedar Star Academy is ranked  3rd place in New Jersey and is a very competitive team in New Jersey. As we warmed up my eyes were fixed on how they had amazing footwork and my new teammates controlled the ball as if it was apart of them. I was dribbling the ball trying to show my talent when Preston came and bodied me to the floor. Preston stared me down as I laid on the floor as if I was his prey and he was the predator. I hit the ground hard and as I got back up, I was surprised at how physical he was and I realized that I can not go in soft ever again. After practice, I sat on the bench and started to think about whether or not I will ever be able to play at such a high level. I was worried that I would not get the chance to get playing time. I felt as though… I was just going to be a benchwarmer.

After two days, I was  accepted into the team, my heart pounded really fast not because I was nervous. I was filled with extreme pride  and jumped up in excitement and joy that I was able to push myself during tryouts and showed that I had the potential to be a good soccer player for my new team. During the following weeks, I pushed myself everyday at practice. I worked harder than most but I still was not on the roster for any of the games in the weekend. This is when I started to doubt myself and my ability to push myself started to vanish slowly. I stopped working hard at practice and I stopped trying. I felt that my hard work would never grab the coach’s attention and I would just be a bench warmer.

Usually, I would be able to solve my problems on my own because I did not like asking for help from others. However, I was not able to break out of this state of doubt and I lost confidence in myself. I felt like everything around me were overwhelming and I couldn't breathe, I needed help but I was afraid to open up. To express my emotion to me felt like I would be judged for who I am. I had to talk to someone so I opened up to my father and I told him about me not being able to start and i had been putting in so much work. I told him that I felt like giving up because I was not good enough. My father paused for a second and then said, “you just have to keep working, I know you might think you not the best now, but you will be. The best players in the world do not get anywhere without starting from the bottom.” I took in consideration of what my father said to me and I kept on working hard. I was finally got playing time and  it was debut, I was subbed in to play second half. I thought I was not going to score but the ball was crossed into the middle and the goalie was not able to keep the ball in his hand and it dropped right in front of me. I hit the ball in and I felt like nothing could stop me anymore.

I was able to overcome doubt by me working harder than I have ever worked before and opted to take a chance when failure was a real possibility. And then, rather than struggling on my own, I reached out for help from people around me because I needed them to succeed. This will help me in college because I will continued to open up to people when I most need help.

I am now able to open up to people and ask for help when I need it the most. I realize that although I am good at dealing with my problems on my own, at some point I will not be able to deal with my problems myself and will need help. I am also able to not doubt myself in life because by doing so I put myself at risk of not achieving what I want in life. I believed that when I was able to move forward from doubting myself I only became more successful in life. These are important life lessons that I would like to take to college because in college I can be successful by asking people for help when I cannot help myself on my own.