College Coach? Click here to view all of Dylan's information. 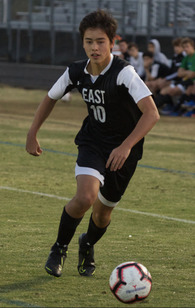 I am a technically-oriented, left-footed attacking midfielder, in the mold of #10 players like Silva, Mata, Ozil, Dybala, etc. I spent much of my childhood in France and have played soccer year-round since I was seven years old. I take pride in being an unselfish, team-oriented player. My strongest skills are probably passing and dribbling, and I love to create scoring chances for my teammates. I have good ball control so I take corners, free kicks, and penalties for my teams, but I can also score, and I'm getting better as a defender as well.  I am most comfortable at the #10 position, but I can also play holding midfield or on either wing.

I speak three languages (English, French, Japanese) and have a very international background. I lived in France for 10 years between the ages of three and 13, and live in a multicultural household (my mom is Japanese and my dad is American). I have also traveled to more than a dozen different countries.

I love soccer. I'm an Arsenal and France national team fan and follow the European leagues religiously. Over the past two seasons for my Triangle United club/travel team, I scored 13 goals and had 21 assists in 50 games. I was also a regular starter and had 15 goals and 10 assists in 25 games played for my East Chapel Hill High School team in the Fall 2019 season. I was our team's top scorer and was second in assists, and also finished tied for second in the league in offensive points (goals + assists). I am particularly proud to have contributed when it counted most, scoring 6 of our team's 9 goals and assisting another in our 3 playoff games.

I am a good student as well and have a high GPA at one of the most competitive, highest-ranked public high schools in North Carolina. I am young for my class (currently HS junior but 9/23/03 birthday means I would normally be in the sophomore class) so I am open to taking a gap year or red-shirting for development purposes. Both my father and grandfather played college baseball as stepping stones to attaining professional degrees and I would love to follow in their footsteps.

I am open to different types of schools around the country, though I am primarily focusing on smaller liberal arts schools (Division III or Division I). My ideal school would have strong academics, an international student body, and a team that plays attacking, technically-oriented soccer.