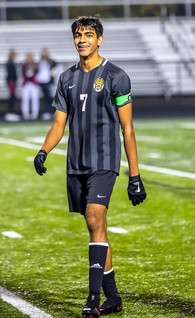 I primarily play the Winger position, but I also play at Attacking Mid. My coaches say they appreciate that I have a strong soccer IQ and I'm able to read the game well. They rely on me to create my team's scoring chances with my ability to shoot, cross, and assist my teammates. Also, they like that I’m strong at dribbling and ball handling, able to beat defenders in 1v1 situations or to take on pressure and pass to an open man. I've played Futsal my entire life, and that has helped me be good in tight spaces. My club team is Ohio Galaxies FC Elite 03 from Dayton. My coach is Jason Tackis and I really like playing for him. Our team is ranked #3 in the nation on SincSports and #1 in Ohio. I’m two-footed, so I’m very comfortable playing on both sides of the pitch.

In addition to my regular club team, I was selected to the U.S. National Futsal U16 team where we competed in Buenos Aires during 2019. I have also been very active in ODP, having been picked twice among 18 Midwest players to the Region II ODP team to compete at IMG Academy in 2019 and 2020. I have played in Barcelona 3 consecutive years, having the opportunity to compete against FC Barcelona in the MIC tournament in 2016. In addition, I've previously been invited to train several times with the Columbus Crew SC Development Academy team.

I was fortunate to be voted Varsity Captain for my high school soccer team and led training sessions for the team during the past summer. I finished my senior season with 20 goals and 15 assists in 17 games, receiving Conference Player of the Year, Ohio Division I 1st Team all state, and United Soccer Coaches All Great Lakes Region Team

My academics are very important to me, too, and I have been able to balance high level athletics and school. I currently have a 4.62 GPA and a 35 on the ACT. I’m a Member of National Honor Society, taking AP and Honors classes. I’ve also taken College Credit Plus courses. In addition, I’m a Member of the Spanish Honor Society and State Champs/National Qualifier with HOSA (Health Operations Students of America), and was chosen for the AP Scholar With Distinction award. I volunteer with TopSoccer (kids with special needs), an orphanage in Mexico, a local hospital and I’m a Tutor for other students at Mathnasium Learning Center.

Along with team soccer training, I’ve worked with personal fitness trainers on my own and I also lift weights consistently. I have an obsession with this sport. I wake up and go to sleep thinking of soccer and how I can improve. When I don’t have school, I usually train at least 5 hours or more in a day, including working out, running, playing, or proper recovery (whatever I can to improve). I’m also extremely passionate about watching and analyzing soccer to apply it to my game. I want to keep playing soccer at the highest level possible. I want to be pushed to my limits by the others around me, as I know that playing with better players will only bring out the best in me. I have spent plenty of late nights and early mornings working on my craft. With my dad’s recent passing, I am now more driven than ever to do what I know would make him proud of me. This is more than a passion for me, this is a way of life.